Australia’s U-23 men’s national football team recorded their first win at the AFC U-23 Championship Thailand 2020 on Saturday evening, producing a spirited display in steamy conditions to defeat Thailand 2-1 at the iconic Rajamangala Stadium.

In front of over 22,000 vociferous supporters in Bangkok, the green and gold came from a goal down to defeat the competition’s hosts, with Perth Glory FC marksman Nicholas D’Agostino showing his class to fire an important brace for his nation.

D’Agostino’s first goal came shortly before the half time whistle – the former Brisbane Roar man producing an excellent angled strike after running on to a well-weighted pass from Wellington Phoenix’s Reno Piscopo to cancel out Anon Amornlertsak’s 23rd minute opener.

Australia’s winner came in the 76th minute of the contest when D’Agostino put the icing on a fluent team move. Australia’s number 15 sent a crisp shot beyond Thailand custodian Korraphat Nareechan to put Australia 2-1 up.

Following the match D’Agostino said that his two-goal effort for his nation ranks as one of the highlights of his developing career.

“It is definitely up there,” he said. “It is probably one of my greatest career achievements so far, it is my first Asian Cup, so I am absolutely delighted.”

“Obviously it was a tough game in front of the 22,000 fans that came out tonight. Thailand in their home country, it was always going to be a big game but especially going one-nil down early, that was tough, but we knew that we had the fight and courage to come back and we showed a lot of that tonight and got the result and that is massive for us.”

“We have great players here from all over the world and we knew that if we had a lot more freedom and courage and confidence on the ball that we could break down anyone.”

“I think the boys showed a lot of fight and courage and I think the goal at the end of the first half really helped a lot leading into that second half,” he said.

Meanwhile, Head Coach Graham Arnold praised his team’s character in his post-match press conference and offered his Australia’s thanks to the Thai supporters who unveiled a large banner reading “Pray For All Lives; Thai Hearts For Australia”.

“I think we showed great character as a team after going down one-nil,” Arnold said. “It (conceding) took the confidence out of the team for a good ten minutes or so, but I thought after that, especially second half, we played very well and should have won by more.”

“We have only been together as a team for a short period of time and the twenty-three players that we have with us have come together and while they don’t know each other perfectly you can see the improvement in every game.”

“We just needed more patience on the ball. I thought second half we controlled the game much better. We made Thailand work hard defensively and then they ran out of legs.”

“The conditions are very taxing and no doubt there will be more changes for the Bahrain game so that we can get fresh legs on and keep working hard.”

“We want to thank the Thai people for the beautiful banner behind the goal that their hearts are with Australia at the moment because of the bushfires. Thank you to all the Thai people, beautiful.” 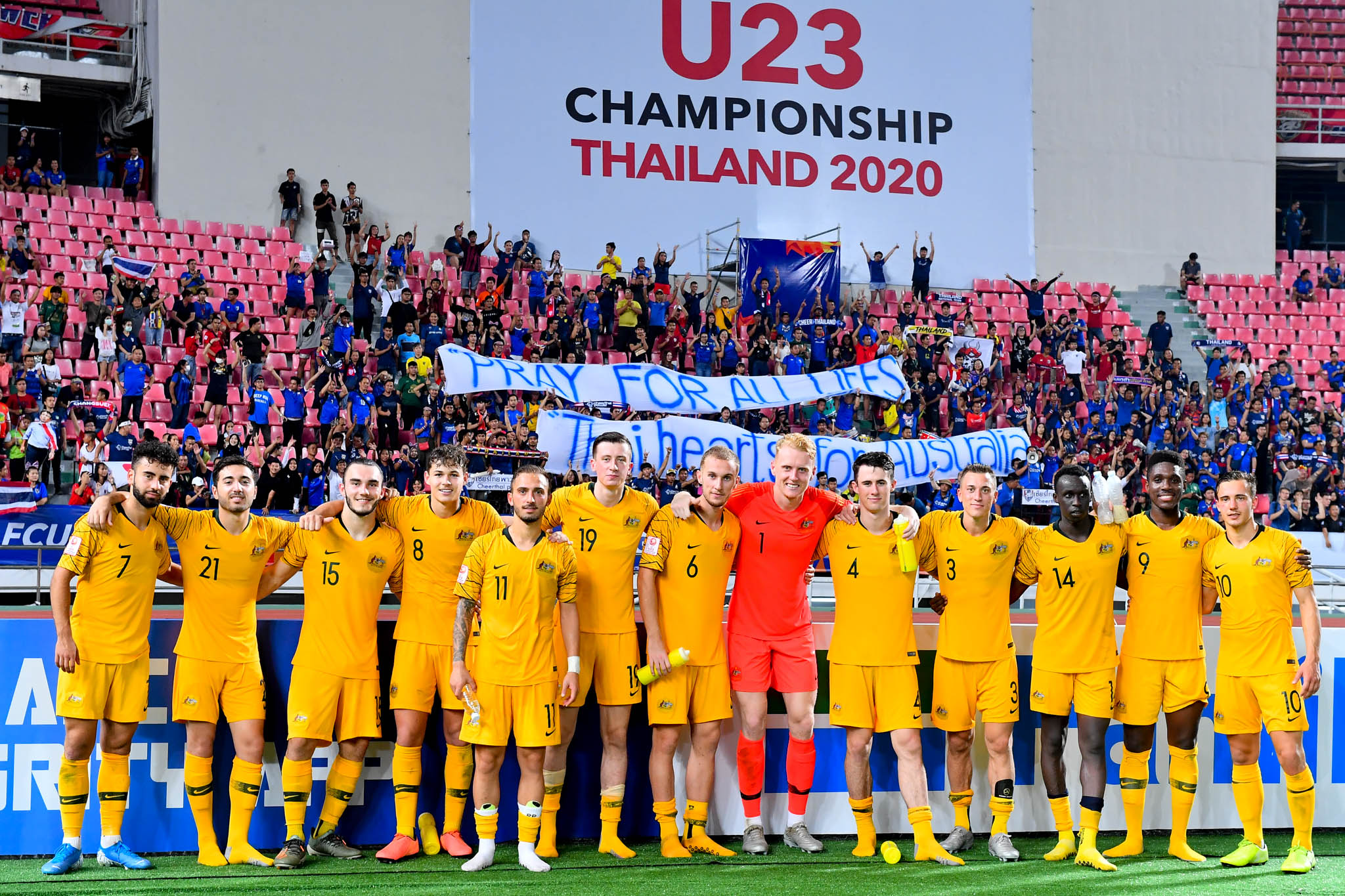 The Socceroos last travelled to Perth in 2016 looking to continue their pursuit of a place at the 2018 FIFA World Cup, and took a strong step along the Road to Russia by clinching a tough 2-0 win over Iraq at HBF Park. Almost 19,000 fans filled the stands to watch the tightly

Semi-Final spots in the Scottish FA Cup are up for grabs for Socceroos duo Martin Boyle and Tom Rogic, while Aaron Mooy and Maty Ryan face a key clash in the race for Premier League survival. Boyle's Hibernian kick-off Quarter-Final weekend on Saturday morning (6.45am AEDT) wh

Who Am I? Guess the Socceroo

Every Thursday we're going to be giving fans the chance to test their Socceroo knowledge by guessing who the player is that we've blanked out of an image. Ahead of the clash between Australia and Kuwait in Perth, we've picked a former Socceroo from Perth this week. To guess

Spending a day in Perth with Graham Arnold