A proud Ange Postecoglou says there’s “no limits” to what this Socceroos side can achieve after they went close to pulling off a shock win over world champions Germany.

Goals to James Troisi and skipper Mile Jedinak had the Socceroos 2-1 up inside the last 10 minutes before a late Lukas Podolski goal salvaged a draw for Die Mannschaft in Thursday morning's (AEDT) friendly in Kaiserslautern.

But the result was the only disappointment for the Socceroos boss after watching his under-strength troops more than match it with the world’s best.

“I’m super proud. We threw some big challenges to some of our boys today and they were up to it,” he told Fox Sports.

“I’m a bit disappointed we didn’t get the win in the end….[but] now we push on.

“There’s no limits.  The Asian Cup was the beginning of something and tonight was another indication we’re heading in a good direction.

“I would have liked to have won and I’m bit disappointed we didn’t do that but the other thing was the performance. It wasn’t a backs-to-the-wall.

“Yeah we had to defend strongly in the second half but besides that we matched them, we went toe-to-toe with the best in the world and that’s what I’m most proud of.” 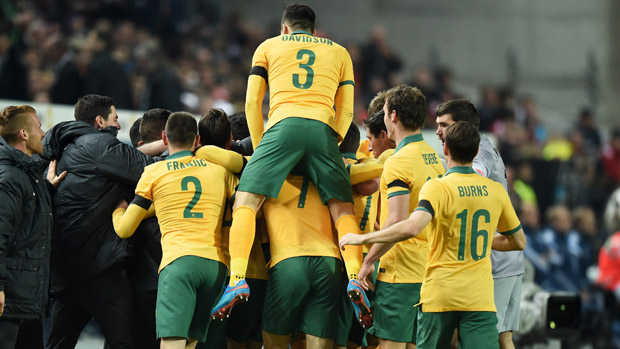 It was a very different team Postecoglou was forced to put out than the one which won the Asian Cup, with the likes of Tim Cahill, Matthew Spiranovic, Massimo Luongo, Robbie Kruse and Trent Sainsbury missing through injury.

Luke DeVere was handed a debut in the heart of defence while Nathan Burns, Troisi and Mathew Leckie were also impressive.

“I hope [this result] sheds us of any inferiority complex we might have of ourselves,” Postecoglou said.

“I always said we believe our players are as good as anyone. This gives us a good foundation to keep moving forward.

“To see Luke DeVere play 90 minutes against the world champions and he’s not anywhere near 100 percent but you see even right at the end he put [Podolski] off in that on-on-one.

“That’s the belief Australian players have.”

The Australians took the game to the hosts from the outset and despite going behind to Marco Reus’ early goal, deserved their lead for their enterprising play.

Leckie, Burns and Troisi all squandered chances to extend the Socceroos lead but the front-three couldn’t for their heavy pressing and high work-rate throughout.

“We looked threatening, we were mobile and our pressure was immense all over the park,” Postecoglou said.

“They tried to play out and we looked threatening every time. But the whole side was great.

“We literally had one session with them. A lot of the boys just got off 24 hour flights 48 hours ago so to play like that was fantastic.”

The team will have a few more days together now to prepare for Tuesday morning’s (AEDT) friendly with FYR Macedonia in Skopje.