In what turned out to be the Green and Gold’s toughest test so far, the Socceroos attacked their opponents from the off.

After just four minutes, Jackson Irvine dispossessed Noor Al-Rawabdeh in the middle of the park, and with two defenders breathing down his neck, burst forward towards the top of the penalty area before firing a shot just over the crossbar.

The chance then spurred Jordan on, who pushed forward themselves through Musa Suleiman. The crafty attacker carried the ball from the halfway line to the edge of the box before he was dragged down by Martin Boyle who subsequently picked up a yellow card for the challenge.

While the free-kick did not force Socceroos’ goalkeeper Mat Ryan into a save, it did cause concern by sailing just wide of the top left corner.

The midfield battle then took shape and both sides fought for the ascendancy in the middle of the park.

However, the deadlock was almost broken after 26 minutes. In what was almost a carbon copy of the Baha Abdel-Rahman set-piece at the other end of the field, Boyle hammered a free-kick just wide of the top left corner.

The Socceroos had a fantastic opportunity 10 minutes from half-time when Boyle picked up the ball on the half-way line, drove forward towards the edge of the area, cut inside and found his club teammate Irvine in the centre but the midfielder could not direct his shot on target.

Jordan created a chance late on in the first half through a free-kick which was whipped in from the left and created all sorts of problems for Ryan who was able to tip the ball wide before the offside flag came to the rescue of the Green and Gold.

It was a bright start to the second half for Jordan despite some lights being lost in the Jaber Al-Hamad International Stadium due to a power outage in the Kuwait City area.

Although, meaningful scoring opportunities were few and far between and Socceroos’ Head Coach Graham Arnold replaced Jamie Maclaren with Adam Taggart and Kenny Dougall with James Holland in the 69th minute.

Trent Sainsbury almost marked his 50th Socceroos appearance with a headed goal as he rose highest from a free-kick some moments later but could not direct the ball goalward.

With 15 minutes remaining, Australia had their best opportunity of the match as James Holland pounced on a loose ball in the box and unleashed a wicked strike that blasted off the post.

But it did not matter as the Socceroos took the lead and broke the resolute Jordan defence through Souttar just moments later. The tallest Australian outfield player ever made it six goals from five matches with a header from an in-swinging Boyle corner.

With Jordan needing at least a point to have a chance of finishing as one of the best five runners up from the eight groups, they lifted the tempo and pressed the Socceroos intensely.

Tempers boiled over as the game drew to a close with Jordan forward Suleiman shown a red card for an altercation with Behich. Despite the heated finish, the Socceroos held on for a memorable victory and set a new record of eight wins in a row. 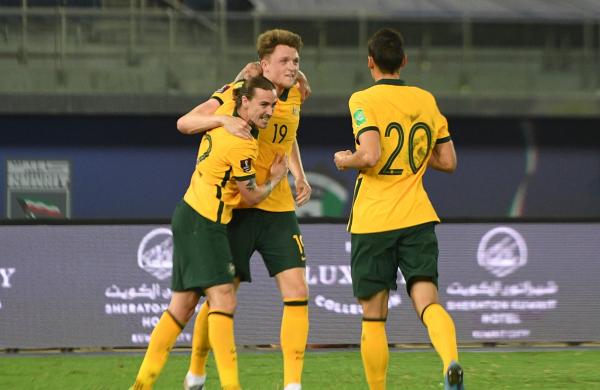 Adam Taggart's sixth Caltex Socceroos goal has given Australia a historic 1-0 away win over Jordan to extend their lead to five points at the top of FIFA World Cup Qatar 2022 qualifying Group B. The 26-year-old striker sparked his country's first-ever away victory over Jordan