You can take the boy out of Mareeba...

Despite scoring a brace against Argentina, finding himself on back pages and sports bulletins around the world, the boy from Mareeba is as humble as ever.

When Nicholas Panetta was growing up in Mareeba – a town of less than 7,000 people in Far North Queensland – playing football professionally would have seemed a distant pipedream.

But now it’s almost a reality.

Panetta played a massive role in the Joeys’ 2-1 FIFA U-17 World Cup victory against Argentina, which sealed the Australians’ spot in the Round of 16.

The boy from Mareeba made the world take notice of him, scoring a brace in the famous win.

His goals were shown around the world on news reports and football shows, with his second in particular making more than a few highlights reels.

It was an audacious volley from 25 yards out that bounced through a sea of defenders and beat the Argentinian goalkeeper, sealing passage to the Round of 16.

“I just saw it coming over and it looked too good not to hit,” Panetta said.

The gamble paid off and Panetta landed himself on the back page of his hometown newspaper the day after the game.

Still being just a teenager, he could be forgiven for basking in the precocious talent that was on display on Saturday night.

“Yeah, it could mean a lot for my career but I’m not really thinking about that,” Panetta says.

“My career hasn’t even really started yet, and a lot more will happen by the time it ends.” 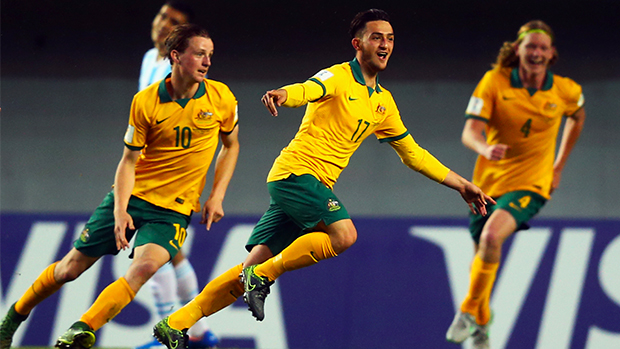 Panetta grew up playing for the Mareeba Bulls in his hometown.

For a club in a town with such a small population, the Bulls have a rich history of producing big-name players, with both former Socceroo and Socceroos coach Frank Farina, as well as former NSL and A-League midfielder Wayne Srhoj playing their junior football at the club.

“There wasn’t too much to do in Mareeba on the weekends,” Panetta said.

“Playing football and hanging out with friends.

“That was about it.”

In its recent history, the town’s football club has punched far above its weight, competing in the old Queensland State League, before returning to the local leagues.

It was at the Bulls where Panetta learned his trade, but when he began to show promise as a young teenager, he was moved on to the FNQ National Training Centre in Cairns.

There, Panetta’s parents would drive him almost an hour from Mareeba to Cairns and back, at least three times a week.

The commitment paid off, with the youngster soon being noticed by the Queensland Academy of Sport and he made the move down to Brisbane.

He continued the journey even further south to the FFA Centre of Excellence based in Canberra, where he now plays his football.

Panetta’s journey so far wouldn’t have been possible without the support of his parents.

When he scored his first goal against Argentina, all he could think about was trying to find them and celebrate with them.

“I went straight for my parents after that first goal,” Panetta said.

“I know they were somewhere on that side of the field.

“It means a lot to me that they made it all the way over from Brisbane to watch me play.”

Catch Nicholas Panetta and the rest of the Joeys in action on Thursday, 29 October from 10.00am (AEDT) on SBS as they take on Nigeria for a place in the FIFA U-17 World Cup quarter finals.