Sainsbury is back in the green and gold for the two crucial FIFA World Cup qualifiers over the next week, starting against Tajikistan in Adelaide on Thursday night.

While the 24-year-old was a key figure in last year’s AFC Asian Cup triumph, he has managed just a handful of appearances since due to injury and lack of matches at club level.

But after finding a new home in China at Jiangsu Suning last month, Sainsbury is back in Ange Postecoglou’s squad.

“There’s a lot of competition for spots and Ange has created a lot of depth in the squad,” Sainsbury told reporters on Monday.

“It means every time you take the training paddock you have to give 100 percent and give it your all. It’s the little things that count as well.

"Your diet, your hydration, everything that can help me take that spot and make it my own, I’ll do.

“Ange puts a great deal of confidence in the boys…he’s a great leader,” Sainsbury added.

“With confidence there is always going to be a little bit of arrogance. The best teams and best players in the world have all got that arrogance.

“We just have to keep it under wraps though and remember we’re here to represent our country and do the job professionally.” 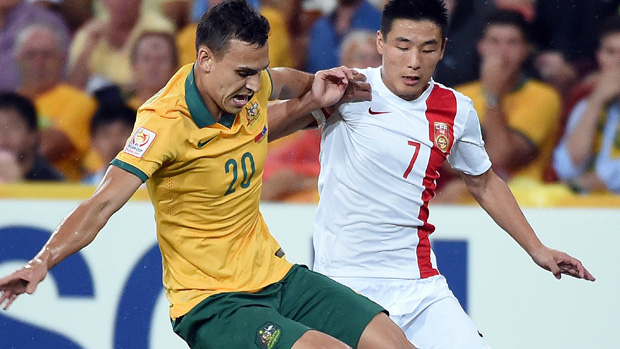 Sainsbury’s hopes of becoming a first-choice defender for Postecoglou are sure to strengthen now he is playing regularly in China.

His club has signed world-class Brazilian talents like Ramires and Alex Teixeira and the Perth-born defender admits he’s benefitting from having to mark-up on these guys day in, day out.

“It’s definitely helping me playing alongside those quality players,” he said.

“It takes your game to another level. But now I’m focused on coming into camp and doing what’s best for me and best for the team.”

The Socceroos currently lead their qualifying group by two points from Jordan, meaning a win and draw in these last two games will book their spot in the next round of qualifying.

While the Aussies are ranked 83 spots higher than Tajikistan and won 3-0 in the reverse fixture in Dushanbe, Sainsbury says there’s no chance the side will be expecting an easy ride on Thursday night.

“It doesn’t matter which team you play, this is a qualifying game, it’s a one off so we have to go there, be professional, do our job, show them the respect they deserve and three points is all that we want to get,” he said.

“You’re putting on the shirt which has your families name on the back and you’ve got the [Australian] crest on the front.

"You’re not doing it just for yourself, there’s a lot of other people involved… you just have to remember that.”