Who will replace Jedinak for the Socceroos?

Australia will be without captain Mile Jedinak for their second match of the Asian Cup against Oman on Tuesday after the Crystal Palace midfielder twisted his ankle in the 4-1 opening night victory over Kuwait in Melbourne.

Given Ange Postecoglou is likely to retain the 4-1-2-3 formation which proved so successful at AAMI Park, the head coach must now decide on who will replace Jedinak as the lone holding midfielder for the clash with Paul Le Guen's side at Stadium Australia.

They're big shoes to fill, with Jedinak's tough tackling and assured passing laying the foundation for Massimo Luongo and James Troisi's strong performances in attacking midfielder.

Melbourne Victory captain Milligan has been a regular starter under Postecoglou and began the World Cup as one of two holding midfielders alongside Jedinak against Chile.

Although the switch to one holder means he's fallen down the pecking order for the Asian Cup, Milligan would seemingly remain first in line to take over.

When injury forced Milligan to miss the second game of Brazil 2014 match against the Netherlands, McKay excelled in his place, arguably faring better than the Victory man had in the opener.

However, he generally plays further forward for Brisbane Roar FC, where Luke Brattan is the screening midfielder. 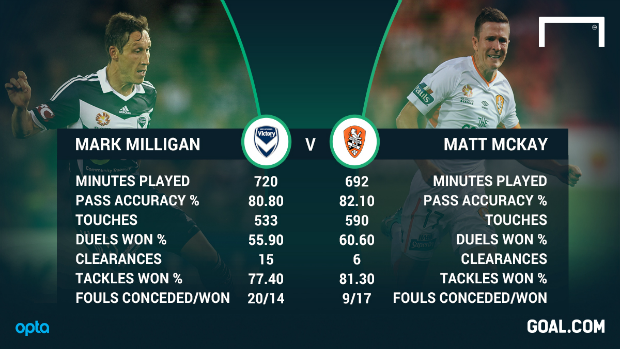 Bresciano has the experience to operate as a deep-lying playmaker, but at 34, he's unlikely to be tasked with screening the back four on his own.

The Al Gharafa veteran would only start there as one of two holders and Postecoglou surely won't change formation after just one match and with only one regular starter missing.

At the opposite end of the scale from Bresciano is Antonis, whose inexperience surely rules him out from covering for Jedinak alone.

The 21-year-old has excelled for Sydney FC in the Hyundai A-League this season, earning a somewhat surprising call-up to the final Asian Cup squad despite missing the Japan friendly in November after being involved in a car crash on the way to the airport.

The impressive youngster operates alongside Milos Dimitrijevic for the Sky Blues and, like Bresciano, would be better with another more defensive midfielder next to him as a pair of holders.

Western Sydney Wanderers FC star Spiranovic is certainly more than capable of replacing Jedinak as a lone holding midfielder. Primarily a defender, he has the necessary strength and appetite for a challenge, as well as the vision to intercept passes or halt attacks before they begin.

Spiranovic is also a capable passer himself and would be well suited to kick-starting Australia's moves forward when receiving the ball from the centre-backs or having won it back himself.

However, Postecoglou would surely be reluctant to altering the back four. Moving Spiranovic into midfield would prompt Alex Wilkinson to return to the centre of defence alongside Trent Sainsbury.

An alternative to disrupting the back four is to deploy the versatile Chris Herd in defensive midfield.

The 25-year-old is something of an unknown quantity to Australian supporters after playing only sporadically for Aston Villa since joining the West Midlands club from Western Australia in 2010.

Seemingly called up to the squad as cover for Ivan Franjic at right-back, Jedinak's absence through injury could open the door for Herd to get into the starting XI, but he remains a big outsider to face Oman.

Tickets to the two remaining Socceroos group matches are still available. Click here to get yours today.