What we learned from the Socceroos' win over Oman

Selection decisions paid off, a defender and the goalkeeper proved crucial early on, while both wide forwards shone to cap off what was a complete team performance in Sydney.

How often do you see unforced changes to a winning team at a major international tournament with progression not yet secured?

Well, Ange Postecoglou is not one to bow to convention and, chastened by the experience of his players running out of steam against Spain at the World Cup, the head coach took preventative action on Tuesday, resting Aziz Behich and James Troisi despite the pair impressing against Kuwait.

There were one or two nervy moments early on at ANZ Stadium when flickers of doubt about the wisdom of introducing Jason Davidson and Matt McKay may have been experienced by the man in charge and certainly by those watching in the stands and at home.

But the newcomers, joined by Mark Milligan in place of injured captain Mile Jedinak, soon settled and contributed to an outstanding first half from the Socceroos.

Presumably the decision to rest Behich and Troisi, both playing regularly in Europe right up until the pre-tournament training camp, was based on the fitness data so exhaustively recorded by Australia's sports scientists.

If it means they are fresh and available for Saturday's crunch match with South Korea, with the added bonus of Davidson and McKay now having minutes in their legs, Postecoglou's selection decisions could yet prove a decisive masterstroke.

Against Kuwait, Torpedo Moscow man Franjic grabbed the spotlight with a piece of skill in the final third, creating the space to cross for Massimo Luongo to put the Socceroos 2-1 ahead.

In Sydney he was vital at the other end. With the score still 0-0, he was called upon to execute an inch-perfect sliding tackle as the last man.

Had he got it wrong, Franjic could have given away a penalty and perhaps been sent off, potentially leaving Australia a man down and a goal down, completely changing the complexion of what instead proved to be a comfortable victory.

Praise should also go to goalkeeper Mathew Ryan, who, having denied Kuwait on several occasions last week, produced a crucial, acrobatic save with the scores level at ANZ Stadium to tip a powerful goal-bound strike over the bar.

Speaking before the Asian Cup kicked off, Robbie Kruse stated his intention was to stamp a mark on the tournament and make up for the disappointment of missing the World Cup after tearing his anterior cruciate ligament in January 2014.

Entrusted with a starting berth in each of the first two matches, the Bayer Leverkusen man hasn't disappointed, driving at the defences of Kuwait and Oman to great effect, causing plenty of problems and getting his reward with a well-taken goal in Sydney.

On the other flank Mathew Leckie came in for some flak on social media owing to his questionable end product in the first 45 minutes against Oman.

While the Ingolstadt forward certainly needs to improve his accuracy with crosses and shots, what shouldn't be underestimated is the extraordinary amount of work the 23-year-old gets through, particularly with his team out of possession.

Leckie is surely one of the hardest working of the 11 Socceroos, constantly harrying the man in possession and sometimes closing down two separate opponents before his team-mates join in the pressing that served the men in green and gold so well at Homebush.

Having hit the bar with a powerful strike in Melbourne, Leckie dragged a shot wide after some great work in the build-up against Oman, before finally producing a beautiful assist from the left flank with the outside of his right boot for Tomi Juric to score the fourth. 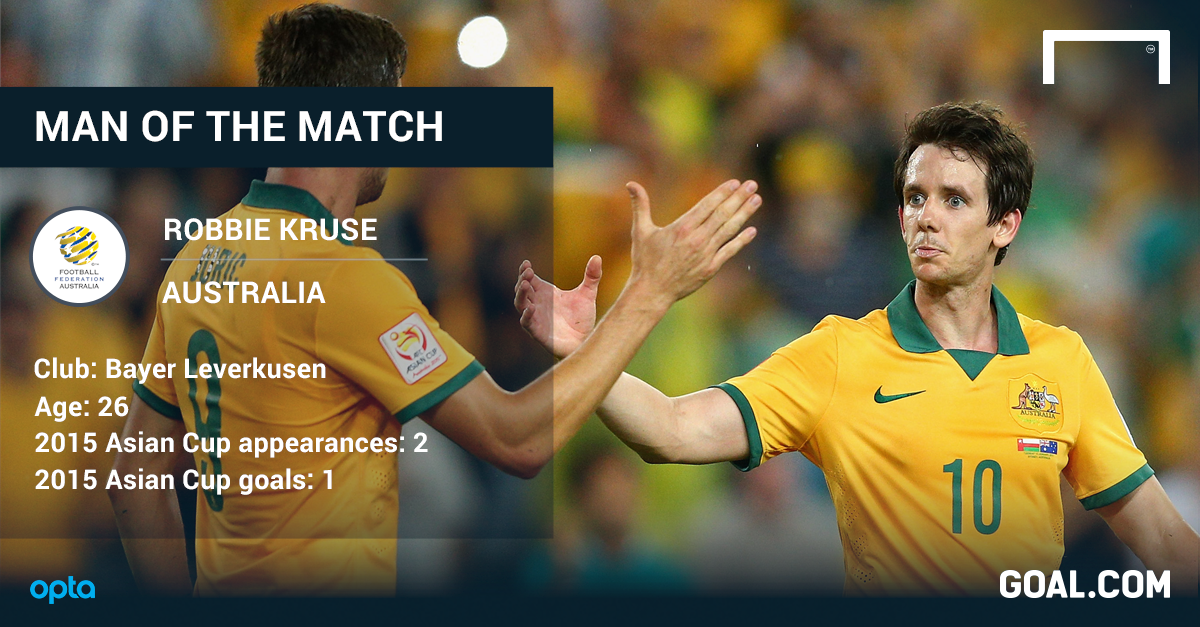 Work-rate and unified pressing the open secret to Australia's success

While supporters are likely to be left purring over the Socceroos' flowing, attacking football on Tuesday, the experts may well identify Australia's work off the ball and in transition as the key to their dominance.

The speed with which Postecoglou's players chased down Oman when Paul Le Guen's side kicked off after conceding the first goal was remarkable but emblematic of the mood and intent of the hosts.

Throughout the game they pressed and harried Oman efficiently and effectively, rarely letting the Gulf nation's players rest in possession. Australia were duly rewarded by enjoying close to a monopoly of ball control while thoroughly demoralising their opponents.

Two of the newest players on the Socceroos' scene - at least in terms of caps - have been among the most impressive in the two matches played so far in the tournament.

Luongo has been the star of the show for Australia, so much so that Postecoglou withdrew him with the game already won early in the second half in Sydney.

Having supplied an assist and a goal against Kuwait, the Swindon Town youngster was at it again in the win over Oman, instrumental in his team's fast start and showing wonderful technique and temperament to set up Kruse's goal.

Further forward substitute Juric improved on an energetic showing against Kuwait with a well-taken goal at the back post from Leckie's delightful cross in the win over Oman.

He was only denied a second from a powerful downward header by a good Ali-Al Habsi save.

The Western Sydney man has already demonstrated his striker's instinct in appearances at the East Asian Cup in 2013 and the Wanderers' run to AFC Champions League glory.

Even the exhibition clash between the A-League All Stars and Juventus couldn't pass without Juric making a statement, the youngster smashing home an instinctive finish against the Serie A champions, proud owners of the best defence in Italy, mere moments after coming on as a substitute.

Tim Cahill's eventual passing will be mourned and felt but at least in Juric - and perhaps in-form poacher Nathan Burns, as well as others - there is now real hope for the future.