Thomas Deng is hopeful his ankle injury won’t stop him playing in the Olyroos’ do-or-die AFC U-23 Championships clash with Jordan on Thursday morning (AEDT).

The impressive 18-year-old started the 2-0 win over Vietnam but was forced off with 15 minutes left after a composed and clinical display in the heart of defence.

And with the side’s fate in their quest to get to this year’s Rio Olympics resting on three points against Jordan, Deng is desperate to play.

“I’m just trying to look after my ankle, hopefully I should be alright for the next game against Jordan.”

“I actually felt really good playing with the Olyroos,” the Melbourne Victory star added of his debut.

“There’s a lot of good players around you and the expectation that’s needed for those games is really high. I put my nerves aside and just played my game.” 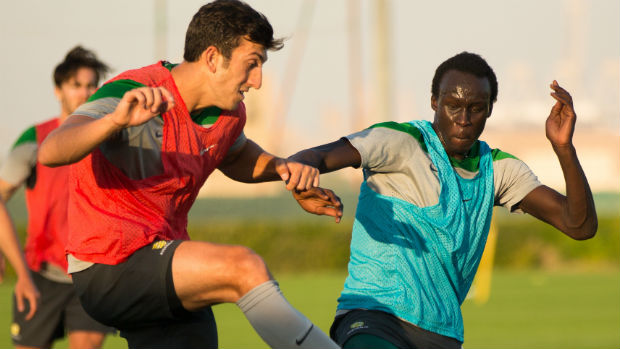 It’s been quite some journey for Deng to get where he is now, on the cusp of helping Aurelio Vidmar’s side qualify for the Olympics.

Born in Kenya, Deng and his family moved to Adelaide when he was just six before heading to Melbourne almost a decade later.

It’s then that his football career really took off, playing with Western Eagles and then NPL1 club Green Gully before he was spotted by Melbourne Victory’s youth set-up.

“It made it a bit easier,” Deng said when asked what impact football had on helping him settle in a new country.

“Just making new friends, feeling comfortable and being able to fit in easier.

“It was an honour first of all for me [to make my Olyroos debut] and my family were very happy,” he added.

The only thing that will make things even happier now is a win against Jordan, to stay alive in the tournament.

“I think we have to approach it like we approached Vietnam. No fear and just play our game,” Deng declared.