James Donachie says this Olyroos group has built a great bond over the years which he hopes will end with a berth at the Rio Olympics. But it's one of the new players from Victory that's really impressed him.

Donachie is arguably the most experienced of a young defensive group Vidmar will rely on to provide the solid foundation in Qatar at the AFC U-23 Championships (which double as Rio qualfiiers).

But one of the new young faces could push for a starting XI berth in Qatar alongside the big Roar stopper.

“Most of the [defenders] that will play here have been in camp before, besides Thomas Deng but I’ve seen him play and Thomas is a brilliant player,” Donachie said of the Victory rising star, just 18 years of age.

While the Kenyan-born Deng is a new face, the majority of Aurelio Vidmar’s squad at the AFC U-23 Championships in Doha have come through the youth ranks for Australia, with this their final chance to make an impact on the world stage together.

“We’re around each other a fair bit, we go on camps for a month at a time so we know each other well, sometimes probably too much,” Donachie told FFA TV.

“The main core group has been around each other for a long time so we know each other pretty well. 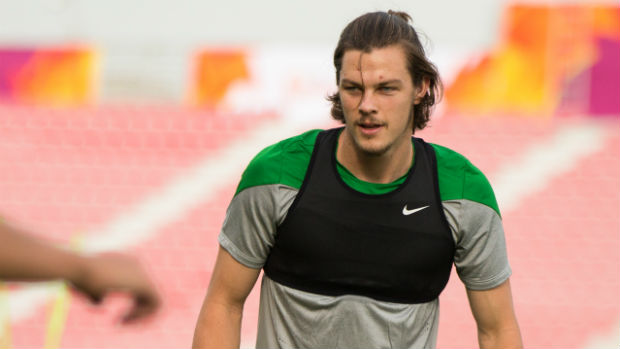 “It would mean everything [to qualify for the Olympics], that’s what we’re here to do,” the Brisbane Roar defender added.

“The Olympic Games in Rio is something you want to be at. We’d be pretty excited if we get there.”

“I feel good, mentally and physically,” he added. “If you’re lucky enough to play Olyroos and in your club team as well then good on you but sometimes it’s not that easy as I’ve found out.

“But I feel good, training has been good at Roar with [John Aloisi] so I feel pretty sharp.”