Socceroos boss Ange Postecoglou has dismissed concerns that speculation over the club futures of a host of their players could derail their charge at the Asian Cup.

Following an impressive start to the tournament, a host of the Socceroos squad have been linked with high-profile and lucrative moves in club football.

Goalkeeper Mat Ryan is reportedly on the radar of English giants Liverpool, while the likes of Massimo Luongo, Tomi Juric, Tommy Oar and Matthew Spiranovic could be finding new homes in the transfer window.

“No one has spoken to me about it and I’d be surprised if the players were distracted about it,” Postecoglou declared on Friday.

“We had a good chat about it at the start of the whole campaign and made it pretty clear that the most important thing is what we do as a team and the individual stuff gets put in the locker until the end of the tournament.

“I’m not surprised some of our guys are getting attention and if we keep doing well that attention won’t diminish.

“To be fair the players have been fantastic.” 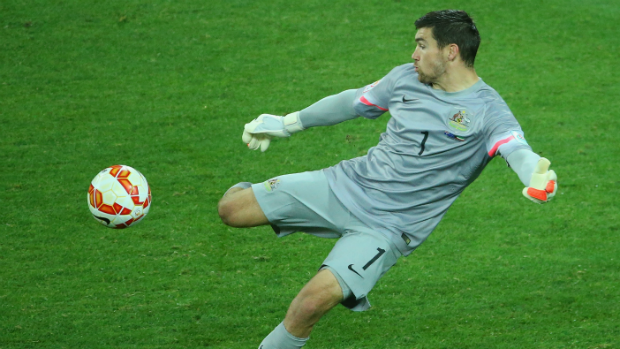 The Socceroos boss conceded the Brisbane Stadium pitch was not of the same quality of the first two venues but is adamant his side won’t change their game plan against South Korea.

Only needing a draw it has been suggested Australia should temper their attacking instincts against the dangerous Koreans but Postecoglou doesn’t see it that way.

“People are pretty clear on what our approach has been and what it will continue to be. There’s a game of football to be played and we want to win it,” he said.

“All we’re looking for is improvement. We got improvement from the first game to the second and we want improvement for the third game. If we do that we’ll be hard to beat.

“We know it’s going to be a tough game and in those conditions it’s going to take a lot out of the players that play. The players are well prepared and the team we pick tomorrow night will be ready for it.”

Mark Milligan is one of those players hoping to be involved against Korea having performed so well – and also scoring – in the big 4-0 win over Oman on Tuesday.

While his selection depends on the fitness of skipper Mile Jedinak, he admits whoever lines up against the Koreans know they face a tough challenge to secure top spot in the group.

“They (Korea) are a very good side. They made a lot of changes in the second game and obviously tomorrow night they will pose a different threat to what we’ve faced previously,” Milligan said.

“They’ve got some fantastic players and we’re going to have to be at our best like we have in the first two games.

“We’re going to have to be disciplined and make sure we do the right things. We want a positive result we’re going to know we have to do everything right for that to happen.”

Postecoglou added on Korea: “There’s nothing that will surprise us.

“They are a tough team and have some very good individual players, especially in the front half.

“We’re expecting a very difficult game. But we believe if we play at our best and keep improving we can offer some challenges to Korea."