Our fourth piece looks at the Socceroos' 2006 FIFA World Cup campaign in Germany.

Still a part of Oceania Confederation in those days (we're of course AFC now) Adelaide hosted the second round of OFC Nations Cup – which doubled as part of the region’s FIFA World Cup qualifying campaign.

Australia, New Zealand, Tahiti, Fiji and the Solomons competed in the round-robin tournament over nine days, with the top two sides progressing to the final round of qualifying. The winner of the two-legged third round went on to the CONMEBOL–OFC intercontinental play-off against the fifth-placed team from the South American qualifying tournament, Uruguay. The Oceania champion would also qualify for the 2005 FIFA Confederations Cup.

The Socceroos kicked off the second round of their 2004 OFC Nations Cup campaign with a 1-0 win over New Zealand at Hindmarsh Stadium. The Kiwis defended well with numbers but Australia were able to find the breakthrough via a superb Mark Bresciano free kick.

Sitting top of the table, the Socceroos travelled down the road to Marden Sports Complex as they continued their winning run with a 6-1 victory over Fiji. Young defender Adrian Madaschi scored two goals and Ahmad Elrich one while Cahill continued his form with an all-headed hat-trick to give him five goals in three games for Australia.

The next game at Hindmarsh Stadium saw the Socceroos confirm their place in the Oceania Nations Cup Final Play-off later in 2004, with a comfortable 3-0 win over Vanuatu courtesy of a John Aloisi double and a Brett Emerton goal.

While most expected the Socceroos and New Zealand to progress, Solomon Islands threw up a surprise to clinch second spot with a 2-2 draw against Frank Farina’s Australia side in the last group game. Commins Menapi – who played with Sydney United in the old NSL – scored twice for the visitors either side of goals to Cahill and Emerton.

After Solomon Islands clinched second in the group, the final round of the OFC Nations Cup saw the Socceroos play them again in a two-legged play-off. The first game in Honiara saw the Green and Gold jump to a 5-1 lead courtesy of two goals from Josip Skoko and one each from Ante Milicic, Emerton and Elrich. The Australians struggled in the oppressive heat in the second half but were never really threatened other than the one occasion where Batrum Suri pulled one goal back for the Solomons in the 60th minute.

The second match and final leg saw the side thump Solomon Islands 6-0 in Sydney. Harry Kewell, an injury doubt in the lead-up with a groin complaint, scored a goal and was narrowly wide with a header in the first half before he was replaced at half-time with Australia leading 2-0. Tony Vidmar, Archie Thompson, Elrich and Emerton all got on the scoresheet as well. The 11-1 aggregate scoreline ensured a showdown against Uruguay for a spot in the 2006 World Cup and a 2005 FIFA Confederations Cup place.

We all know what happened next.

The 2006 FIFA World Cup CONMEBOL–OFC qualification play-off was a two-legged home-and-away tie between the Socceroos and Uruguay. The first leg on the 12th of November 2005 in Montevideo saw Australia fall to a 1-0 defeat. Only a 36th-minute goal from Dario Rodriguez separated the teams in an open and attacking match.

After losing the opening leg in Montevideo 1-0, Australia needed to win by two clear goals but could only manage one goal in regulation time to send the match to extra time and penalties. The goal came from Bresciano in the 34th minute after some neat work from Kewell, who played possibly his best match for Australia. The Socceroos dominated possession and territory throughout the match, but failed to convert chances in the last hour and in extra time.

Uruguay finished regulation time with star player Recoba and captain Paulo Montero off the ground, and Socceroos boss Guus Hiddink made his own change to the line-up five minutes into extra time, replacing Bresciano with John Aloisi.

Captain Mark Viduka was almost the villain for the Socceroos when his penalty in the shoot-out gave Uruguay a chance to level the scores. But Mark Schwarzer's second save made up for Viduka's error and ensured Aloisi the chance to send Australia to Germany.

Aloisi then stood up to seal the victory with the ninth kick of the shoot-out in what was a new chapter in our nation's rich sporting history and arguably the most significant night for Australian sport since Cathy Freeman won gold at the Sydney Olympics. After years of heartache, the famous strike ended Australia's 32-year exile from the FIFA World Cup.

Guus Hiddink took charge of Australia in 2005 after Frank Farina left the role after Australia's elimination from the Confederations Cup.

The appointment was made specifically to give Australia the best possible chance of success in the lead-up to the World Cup after a 32-year absence from the finals.

Hiddink's career started in 1982, and included spells headlined by PSV Eindhoven, Real Madrid, Valencia, Real Betis, and Chelsea and peaked guiding South Korea to the semi-finals of their home World Cup. Hiddink also took charge of his own national side, Russia and Turkey. 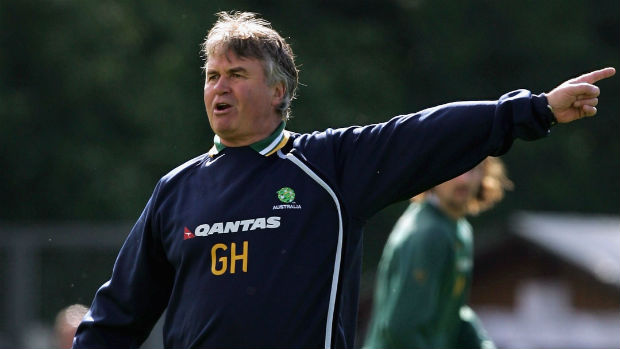 Hiddink sprang a surprise by naming Sydney FC's Mark Milligan, Central Coast's Michael Beauchamp and a 23-year-old Josh Kennedy, who was playing with Dynamo Dresden in the German second division at the time.

While there were some surprises, England was the preferred destination for the vast majority of our stars of the Socceroos’ in 2006, with Schwarzer, Lucas Neill, Cahill, Mark Viduka, Craig Moore, Kewell and Emerton all playing Premier League football in 2006.

Aloisi and Bresciano were also playing in Spain and Italy respectively. 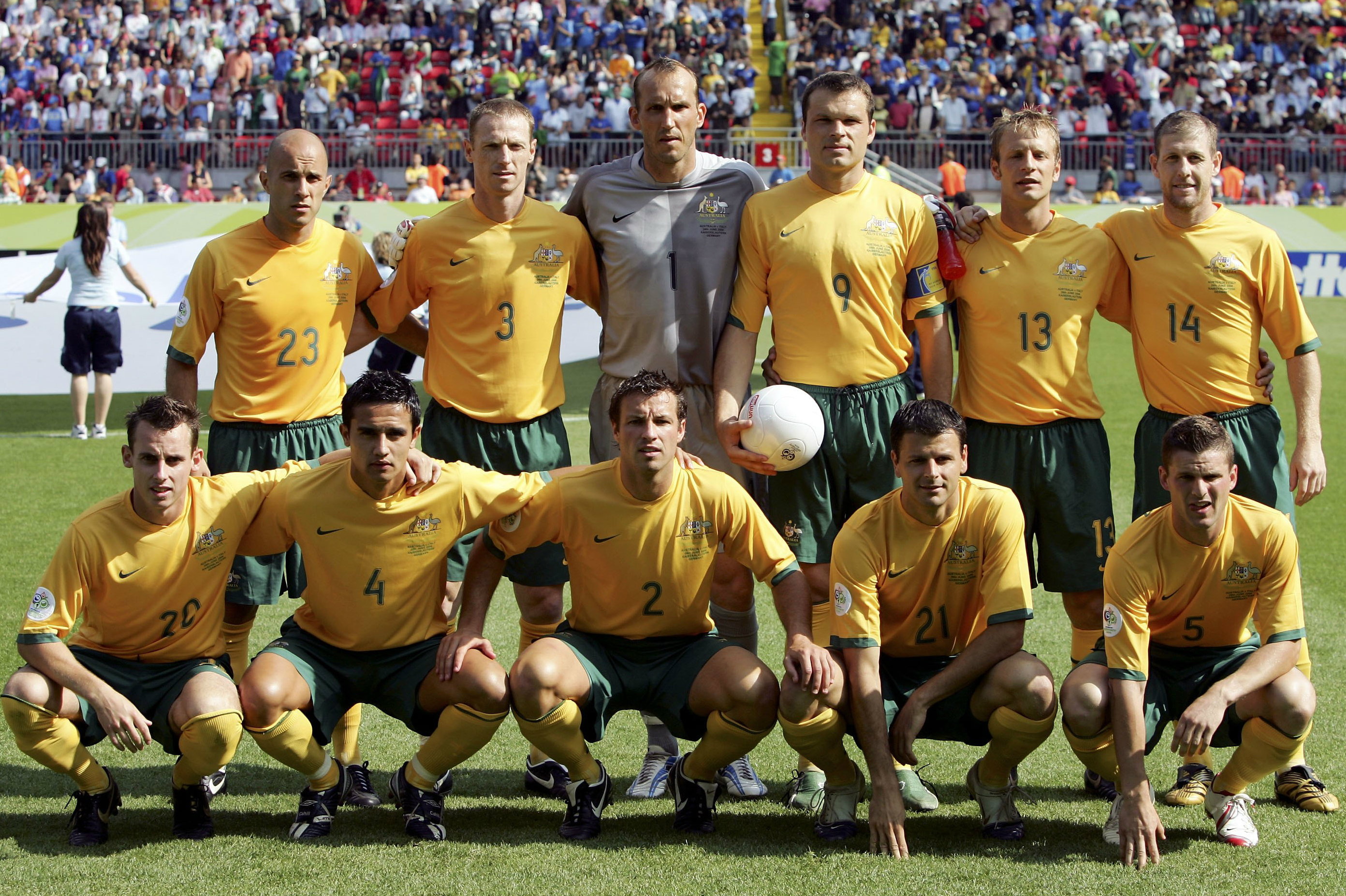 The Socceroos travelled throughout three cities in Germany throughout its 2006 campaign.

Australia played its opening match against Japan in Kaiserslautern, before heading to Munich to take on Bazil and wrapping up the group stage against Croatia in Stuttgart. After processing from the group, the Round of 16 clash against Italy took place back in Kaiserslautern.

The Socceroos base camp was in the town of Öhringen in Southern Germany.

Back among the World Cup elite after 32 years, Australia were drawn in Group F against Brazil, Japan and Croatia in its group in 2006.

After Australia clinched a draw in their final group stage match, they qualified for the Round of 16 for the first time against Italy. 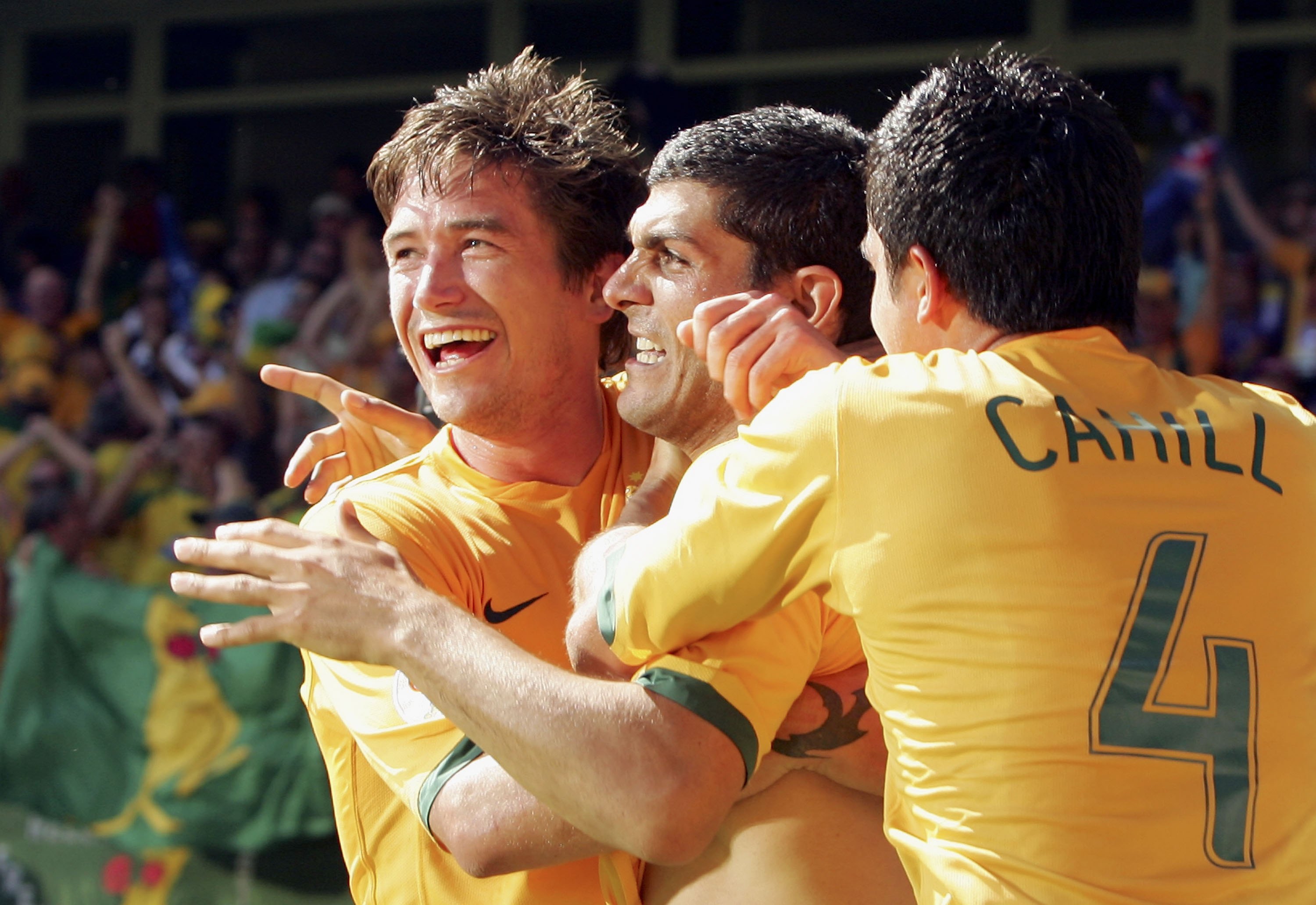 The Socceroos kicked off their first World Cup campaign in 32 years by beating Japan 3-1 in Kaiserslautern. Despite going behind in the 26th minute to Shunsuke Nakamura's cross-come-shot, Australia fought back through Cahill's close-range strike in the 84 minute and an edge-of-the-box screamer soon after.

2-1 up with barely minutes of added time remaining, Aloisi sealed a first World Cup finals victory with a well-placed finish after dribbling into the box.

The Socceroos were well-organised and outplayed Brazil in parts of their second match in Munich, but the footballing powerhouse came away with the win courtesy of goals from Adriano and substitute Fred. A determined Socceroos were unlucky to lose 2-0, but a draw against Croatia would be enough to get through to the Round of 16.

The drama continued in the final group stage match in Stuttgart, with Croatia scoring in just the second minute. Craig Moore levelled things up before half-time thanks to a penalty, but a mistake from goalkeeper Zeljko Kalac allowed Croatia to take the lead again just over 30 minutes from time.

In a frantic finish, Australia peppered the Croatian goalkeeper with Kewell scoring the crucial goal with just 11 minutes left. Referee Graham Poll infamously showed Croatian defender Josip Simunic three yellow cards, while he blew full time as Aloisi was about to give Australia victory, but it was all academic as the Socceroos progressed to the Round of 16.

To say the way the tournament finished for Australia was gut-wrenching is an understatement.

The Socceroos bowed out of the 2006 World Cup finals in the most dramatic of circumstances, when a controversial refereeing decision saw Francesco Totti score with the last kick of the game from the penalty spot to win the Round of 16 clash for Italy 1-0 in Kaiserslautern.

Lucas Neill was adjudged to have fouled Fabio Grosso in the box but replays later confirmed that Neill did not make contact with Grosso. Referee Luis Cantalejo fell for it and pointed to the spot and Totti placed his penalty high to Schwarzer's right, who was unable to repeat his heroics and pull off a last-ditch save.

Australia in the end paid for not pushing more in attack with Italy down to 10 men, following the send-off of Marco Materazzi in the 51st minute. The Socceroos were in control in large parts of the match but could not find a way past the Italians.

It is a loss that still haunts Aussie football fans to this day. Italy would go on to win the final.