Our third piece looks at the Socceroos' 2014 FIFA World Cup campaign in Brazil.

After being granted a bye through to the third round of AFC qualifying because of Australia's top-five ranking in Asia, the journey kicked off in September 2011 against Thailand in Brisbane.

The Thais were daring to dream after taking an early lead at Lang Park, but Matt McKay stood up to spark the Socceroos' revival by assisting both Josh Kennedy and Alex Brosque to rescue a 2-1 win.

A 3-1 victory over Saudi Arabia in 40-degree temperatures in Dammam followed as the Socceroos took control of their World Cup qualifying group.

Josh Kennedy scored a double with Luke Wilkshire putting the icing on the cake 13 minutes from time when he blasted home from the spot.

The Socceroos returned home a month later to face Oman at Sydney's Stadium Australia, and promptly brushed aside the visitors 3-0 thanks to goals from Kennedy, Brett Holman and Mile Jedinak.

Despite recording a resounding victory in the previous encounter, Oman came back with a vengeance in the next match in November and ground out a 1-0 win in Muscat.

The Socceroos only needed a point to progress to the fourth round of qualifying in their next match but Holman ensured the Green and Gold snatched all three points with a 1-0 win over Thailand in Bangkok.

While the last game of the third round of qualifying was effectively a dead-rubber, it still produced an entertaining affair as Australia scored a stunning three goals in three minutes to come from behind to defeat Saudi Arabia at the Melbourne Rectangular Stadium.

The fourth round of qualification kicked off with another trip to Oman as the Socceroos ground out a 0-0 draw while suffering in the heat once more.

Australia then returned home to face off against Japan in Brisbane. Things were looking down when Mark Milligan was sent off after receiving two yellow cards, before Yuzo Kurihara gave the Samurai Blue the lead with 25 minutes remaining but Wilkshire stood up from the spot once more to ensure a 1-1 draw.

The campaign then took a turn for the worst as the Socceroos went down 2-1 to Jordan in Amman. The Jordanians raced to a two-goal lead before Archie Thompson pulled one back for the Green and Gold but it was not to be.

In need of a win in their next match, the Socceroos secured a come-from-behind victory over Iraq in Doha with Tim Cahill and Thompson netting to hand Australia their first win of the fourth round.

However, the joy was short-lived as the Socceroos went on to draw 2-2 with Oman in Sydney with Cahill and Holman once again, saving the side's blushes.

With five games played and six points in the bag, the Socceroos desperately needed a victory over Japan in Saitama.

The result looked promising when Tommy Oar's cross from the left clipped off his marker's foot to sail over the keeper's head and into the back of the net but Japan responded in the 90th minute through a Keisuke Honda penalty.

The Socceroos got the first with a convincing 4-0 drubbing of Jordan at Docklands, with Robbie Kruse scoring once and laying on two assists before Lucas Neil scored his first ever Green and Gold goal.

Needing a win against Iraq to qualify for the FIFA World Cup in Brazil, the Green and Gold ground out a nervy 1-0 win thanks to Kennedy's 83rd-minute winner.

Following poor results against Brazil and France in warm-up matches, Holger Osieck was replaced with Ange Postecoglou ahead of the 2014 FIFA World Cup in Brazil.

He entered the job with a strong reputation, built off the success gained in the National Soccer League and the A-League through a possession-based philosophy that had delivered many titles. 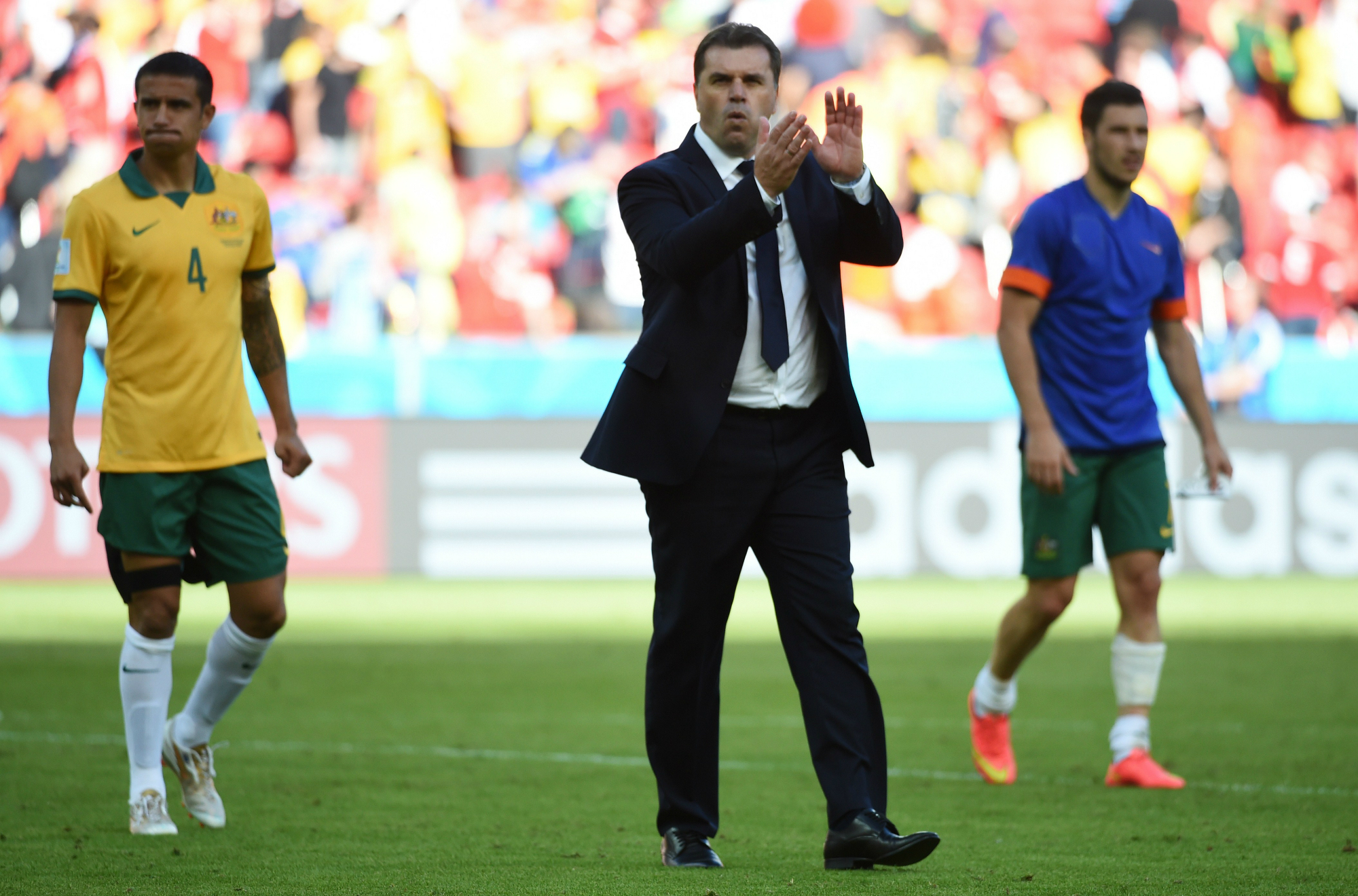 Australia's squad for the 2014 FIFA World Cup was a chance for the nation's young players a chance to make an impression in Brazil.

Postecoglou had previously indicated he would prefer players who could play a part in the campaign for the next World Cup but there was still room for some experienced campaigners.

The A-League's role as a source of homegrown talent was also given a boost with seven of the players in the squad coming from Australia's domestic competition.

The Socceroos travelled throughout three cities in Brazil throughout its 2014 campaign.

Australia played its opening match against Chile in Cuiaba, before heading to Porto Alegre to take on the Netherlands and wrapping up against Spain in Curitiba. Their training base was also located in Vitoria.

Australia were drawn in Group B of the FIFA World Cup 2014 alongside the might of Spain, the Netherlands and Chile.

On paper, Spain shaped as the biggest hurdle for the Socceroos of all three opponents. The Spaniards had dominated world football in the years leading up to the tournament by winning the past two editions of the European Championship.

Chile were the lowest-ranked of all three of Australia's opponents at number 15 but were still well above the 59th-ranked Socceroos.

In the Socceroos' first match against Chile in Cuiaba, goals to Alexis Sanchez and Jorge Valdivia in the opening 15 minutes had Chile in the ascendancy before Cahill got Australia back into the game with a perfect header shortly before the break.

While the side recovered from a disastrous start to push Chile to the limit with a brilliant comeback, it was not quite enough as the Socceroos went down 3-1 in their opening game in Brazil.

Having been somewhat unfortunate to lose 3-1 to Chile in their World Cup opener, the Socceroos defied expectations again as they came from a goal down to lead 2-1 before ultimately succumbing to a 3-2 defeat at the hands of the Netherlands their second group game.

Cahill's wonder goal - arguably the greatest goal ever scored by an Australian - levelled the match after Arjen Robben put the Netherlands in front in the first half.

Jedinak then put Australia ahead from the penalty spot but it was not to be as Robin van Persie and Memphis Depay secured the victory for Louis van Gaal's team.

​The Socceroos signed off from the World Cup with a 3-0 loss to a classy Spain thanks to goals from  David Villa, Fernando Torres and Juan Mata.

After two eye-catching performances against Chile and Holland, it was a game that Australia started strongly but Spain worked their way into the contest and eventually overran a spirited Green and Gold side.

The Socceroos were disappointed by not taking their opportunities to pull off shock results, particularly against Chile and the Netherlands, but their performances gained a newfound respect for Australia in world football.

Despite elimination in the group stage of the World Cup, significant changes were made to the Socceroos squad and the evolution of Postecoglou's playing group bared its fruits in the squad's Asian Cup campaign on home soil.