J-League based Chanathip Songkrasin has been named in coach Milovan Rajevac's 25-man squad for their World Cup qualifier on September 5 against the Caltex Socceroos.

Playmaker Chanathip is currently on loan at Consadole Sapporo.

Other notable inclusions are 19-year-old forward Supachok Sarachat and Muangthong stars Teerasil Dangda and Triston Do.

Do wreaked havoc last time he played the Green and Gold.

Thailand will host Iraq on Aug 31 and play the Aussies in Melbourne on Sept 5 in their last qualifying games for the 2018 World Cup.

With Thailand now under new management – with more defensive structure than before - they pose a tricky test for Australia, who will be desperate to win as they aim to book an automatic qualification spot for Russia 2018.

Rajevac got off to a good start. Guiding Thailand to a win in the Kings Cup last month in Bangkok.

‘The Serbian has been around the coaching block a few times. After a number of clubs in the Balkans, he has taken over national teams such as Ghana, Qatar and Algeria,’ writes Asian football expert @JohnnyDuerden. 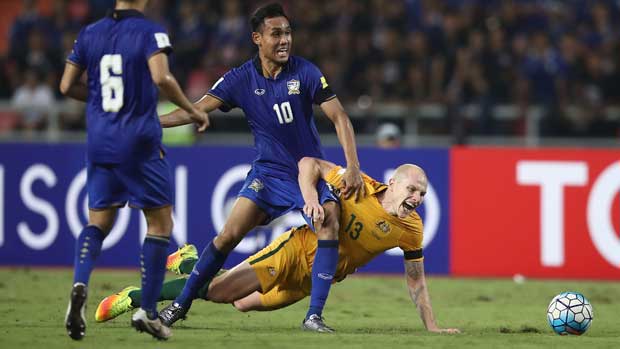 He told the Bangkok Post: "Supachok is skilful. It is good to have some young players in your team. I will get a chance to watch him closely.

"Our goal is to beat Iraq and this would be our first win in this World Cup qualifying round. It would also show a big step forward for our team.

"We want to make progress and our FIFA ranking will surely improve with a win over Iraq."