As the dust settles on the Socceroos' dramatic penalty shootout victory over Peru to qualify for this year's World Cup, we unpack the stats, revisit previous campaigns and find out what it really means to qualify.

After a qualification campaign that stretched a whopping 1,008 days and saw the Socceroos play just four of its twenty qualification matches on home soil, Graham Arnold’s side put in an inspiring and courageous performance to book the penultimate spot at this year’s FIFA World Cup™.

A strong team display, a well-executed game plan, along with the heroics of the substitute goalkeeper Andrew Redmayne, helped seal the Socceroos’ spot at the World Cup with a 5-4 penalty shootout victory over Peru.

By booking a place at Qatar 2022, the Socceroos have qualified for five straight World Cups, and six in total.

Australia has attempted to qualify through to the FIFA World Cup 15 times, with their first attempt being in 1966 when they lost to North Korea.

Les Scheinflug holds the honour of scoring the first-ever goal for Australia in a World Cup qualifier with a 70th-minute penalty. North Korea would famously go on to make the quarterfinals in the 1966 World Cup, losing 5-3 to Portugal.

Australia's campaign for the 1970 FIFA World Cup saw them knock out Japan, South Korea and Rhodesia. After playing three matches against Rhodesia in Mozambique, Australia travelled from the Southern African nation straight to Israel for the next stage of an arduous qualification campaign. They lost 1-0 and then returned home to only manage a 1-1 result in Sydney, which ended the World Cup dream.

But four years later under the guidance of coach Rale Rasic, Australia prevailed from the first stage of qualifying, winning a group that included New Zealand, Indonesia and Iraq. They then faced Iran home and away, winning the first leg in Sydney 3-0 before Iran won 2-0 in the second leg in Tehran. South Korea then awaited the Socceroos. Both matches ended in draws, prompting a hastily-arranged decider in Hong Kong. Jimmy Mackay scored the goal (watch it below) which booked Australia its place in the 1974 tournament.

While the 1974 World Cup ultimately ended in defeat, Australia claimed its first World Cup point courtesy of a 0-0 draw against Chile in Berlin.

Further attempts in ‘78, '82, '86, '90 and '94 were also unsuccessful, with the latter campaign coming as close as Australia had been, losing 2-1 on aggregate to a Diego Maradona-led Argentina.

It wasn't until the 1998 qualifying campaign, where Australia were just 15 minutes away from a first FIFA World Cup appearance in 24 years, that the ultimate heartbreak was felt. With a 2-0 lead (3-1 on aggregate) over Iran at the MCG, the Socceroos conceded twice to draw the match 2-2, with Iran qualifying for the France World Cup 3-3 on aggregate.

The next campaign (2002) ended in another disappointing end, with a 3-1 loss on aggregate against South American powerhouse Uruguay, despite holding a 1-0 lead after the first leg.

But the culmination of all of the heartbreak was let go just four years later.

It all changed when John Aloisi converted the penalty that ended Australia's 32-year exile from the FIFA World Cup.

Back among the World Cup elite after 32 years, Australia was faced with Brazil, Japan and Croatia in its group in 2006.

The fairytale continued to roll on in the group stages as Australia progressed to a Round of 16 clash with Italy. Unfortunately, the Socceroos were knocked out by Italy, who went on to win the entire tournament.

Following the tournament, the Socceroos officially moved from Oceania to the Asian Football Confederation. The Socceroos qualified for the 2010 FIFA World Cup in South Africa in comfortable fashion, but this time were unsuccessful in advancing from the group stage.

Australia qualified for a third-straight FIFA World Cup in 2014, courtesy of a famous header from Josh Kennedy against Iraq. But this time, under the guidance of Ange Postecoglou, the Socceroos suffered three straight defeats against Chile, the Netherlands, and Spain. 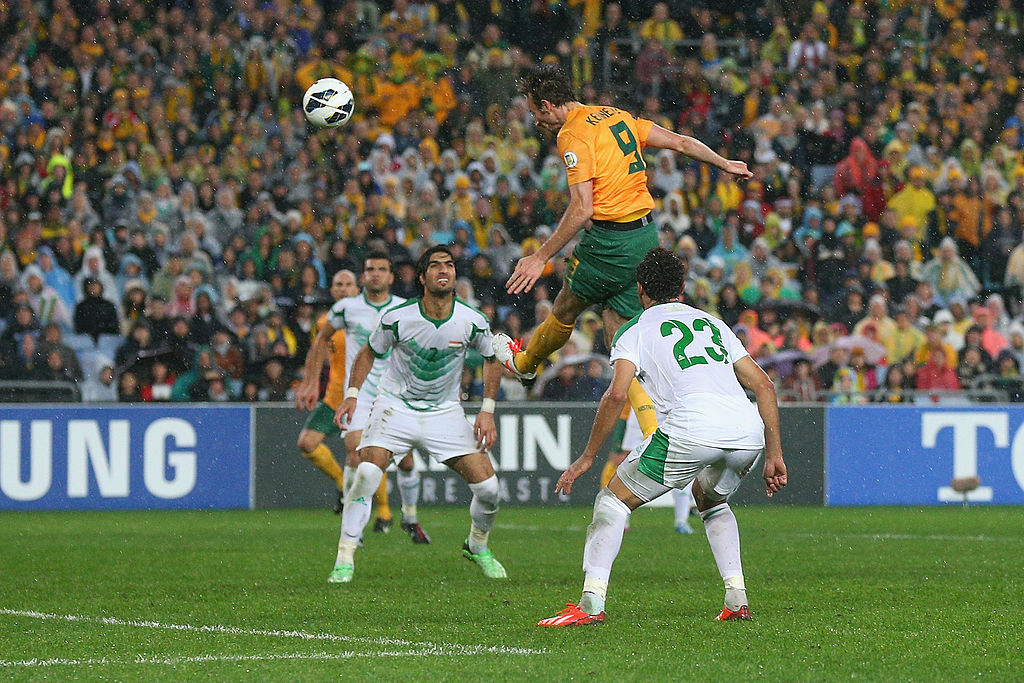 The Road to the 2018 FIFA World Cup in Russia was the longest of any national team, ever.

The side finished third in the final group after 18 matches, and had to play-off against a fellow AFC side and then a side from CONCACAF to make it to a fourth-straight World Cup. A spirited performance against Syria over two legs saw Australia advance 3-2 on aggregate, before defeating Honduras 3-1 across a gruelling two legs.

Australia were drawn against France, Denmark and Peru in Russia, and it was another difficult tournament for the team. The side came close against eventual Champions France, narrowly losing 2-1, before drawing 1-1 against Denmark. However, in a must-win clash against Peru, the Socceroos suffered a 2-0 loss.

The common theme from Australia’s qualification history shows that the Socceroos love doing it the hard way. 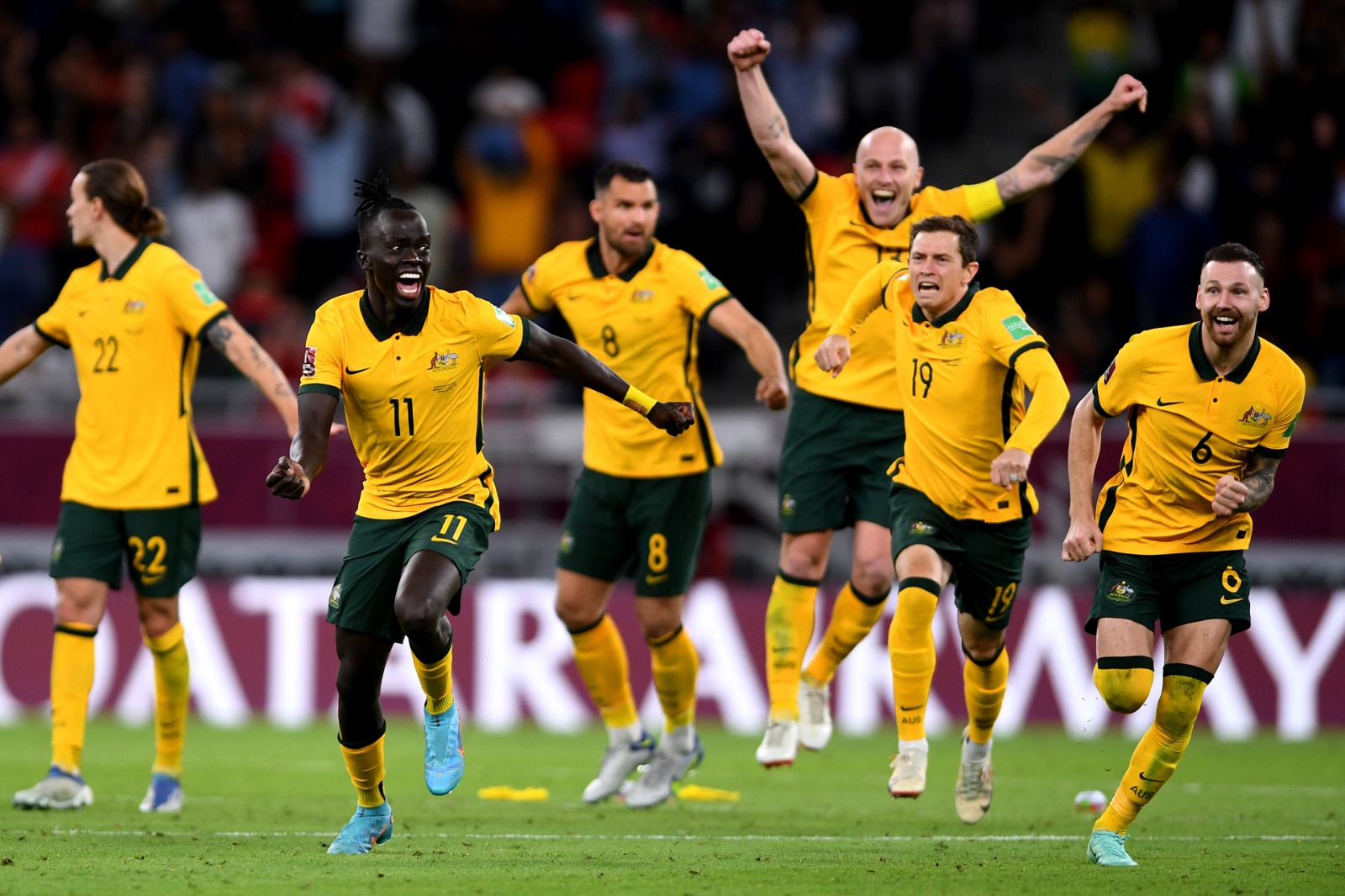 Only three intercontinental play-off ties have been settled by penalties – and all of them have been won by Australia.

A Mark Schwarzer fairy tale headlined the first. It was a clash with Canada for the right to face Argentina for a USA 1994 place and Schwarzer saved two penalties to send Australia to the do-or-die clash. Unfortunately, it was not to be in the final hurdle as Australia was defeated 2-1 by an Argentinan side that had previously set a new world record undefeated run.

While it was Aloisi who stole the headlines 16 years ago at Stadium Australia, this time around it was Redmayne who became a hero after saving a penalty to send the nation to a fifth-consecutive World Cup.