Back in the Caltex Socceroos squad for the first time in almost a year, Matthew Spiranovic has stressed the importance of picking up points on the road in FIFA World Cup qualifying.

After the hard-earned 2-0 win over Iraq on home soil last week, Ange Postecoglou’s side face a big test against UAE in Abu Dhabi on Wednesday morning (AEST).

A member of two previous successful qualifying campaigns, Spiranovic says accumulating points away are just as crucial as winning your home matches.

“Any points are important but the home games definitely have to be strong and hope to take all three, that was a terrific start against Iraq,” Spiranovic told FFA TV.

“When you travel long distances you face challenges like we will [against UAE] with the heat, points are crucial.”

Spiranovic has experience playing in the Middle East, spending a season at Qatari club Al-Arabi. 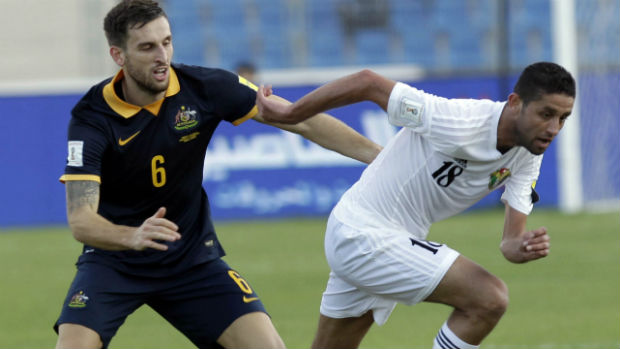 It makes the 28-year-old well aware of the challenges that lie ahead for the Socceroos in what will be heatwave conditions at the Mohammed Bin Zayed Stadium.

“The big factor would have to be the weather, especially this time of the year. [It’s] summer here and just walking down the street you can feel how hot it is,” said Spiranovic, who now plays his club football in China with Hangzhou Greentown.

“As a player that has a huge effect but we just worry about what we can control.

“The medical team here prepare us the best they can to be able to handle those conditions.”

Spiranovic could find himself back in the starting line-up against UAE after Mark Milligan and Trent Sainsbury were preferred in central defence against Iraq.

Asked about the increased depth in the Socceroos defence now, Spiranovic said: “There’s always competition, that’s what the boss has been striving for over the last 18 months to two years.

“Now there’s a lot of options, ultimately that’s great for the team.”