Ange Postecoglou says experiences like his side faced in FYR Macedonia on Tuesday (AEDT) will hold the Socceroos in good stead when the road to Russia 2018 begins in June.

On a frustrating night in Skopje, the Socceroos attack was blunted by the home side’s stubborn defence and a bumpy pitch which stifled their attacking game in a dour 0-0 draw.

There was no repeat of the scintillating display which almost shocked world champions Germany last week, with few clear chances created by the Aussies.

But with the long and arduous AFC World Cup qualifying campaign to start in a few months, Postecoglou believes his side got just what they needed out of the stalemate.

“This is the first steps for us and nights like this are great for us,” the Socceroos boss told Fox Sports.

“It shows the boys that sometimes in international games it’s not just the opponent that can challenge us it’s the conditions and playing in a foreign environment as well.

“Tonight was really good in terms of our learning curve. It’s been a whirlwind two games for us. We’ve had some pretty good players missing from this group and the guys here acquitted themselves well.

“From my perspective we’ve got a real strong pool of players to choose from for the June [World Cup qualifiers] and the back half of the year gets really busy.”

Postecoglou made six changes to the side which drew with Germany, handing a starting debut to Adelaide’s Tarek Elrich while Lazio teenager Chris Ikonomidis played the last 10 minutes.

The front three of Mathew Leckie, Nathan Burns and James Troisi weren’t afforded as much space but still had their moments, with Leckie going closest to a goal with two efforts in the second half.

“It was a bit of a challenge tonight. The conditions or the pitch didn’t help the way we wanted to move the ball around,” Postecoglou said. 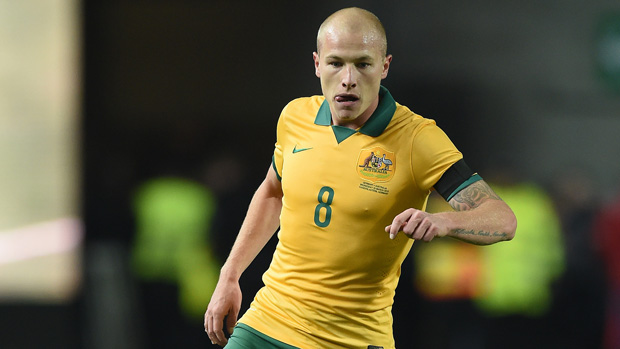 “We started brightly enough then got a bit frustrated and tried to force things. We had some chances which we needed to score to open them up, on the flipside I don’t think [our keepers] had a save to make.

“We had a lot of possession but we couldn’t really create much and the boys started looking for alternatives that probably weren’t there.

“It’s all part of the learning curve. Another game of international experience for a lot of these guys which they need.”