Skipper Mile Jedinak, Tim Cahill and Massimo Luongo were three of the stars that took part in full training in the Socceroos’ first session in Canberra on Monday.

Just three days out from Thursday’s FIFA 2018 World Cup Russia™Qualifier against Kyrgyzstan, 11 of the squad completed the full session at GIO Stadium.

Goalkeeper Mat Ryan and left-Back Jason Davidson were restricted to only walking a few laps, while Jedinak, Tomi Juric and Bailey Wright trained away from the main group.

The session started under the guidance of head physiotherapist Les Gelis with some dynamic stretching. 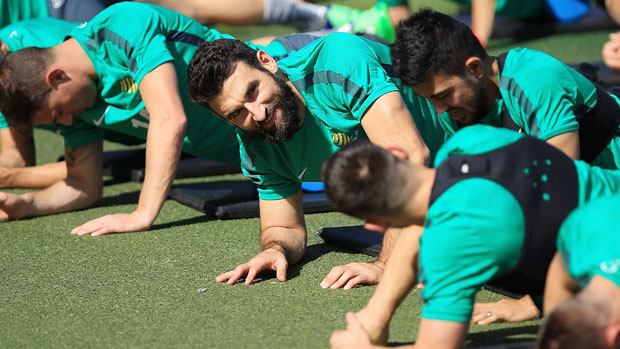 After a warm-up the squad broke away into separate groups – the two ‘keepers, the main group and the light trainers.

The main group kicked off the session with medium intensity passing drill, slowly lifting the tempo the longer it went on.

The focus was on one-touch passing, movement and communication.

In between separate passing drills the players completed a series of runs up and down the pitch, stretching out and increasing the pace as they went.

The goalkeepers kicked off their session with Tony Franken with one and two-touch passing drills before moving onto to close-range reflex saves.

After a quick drinks break, assistant Ante Milicic moved the group onto an extended passing drill, with players forced to move around poles, open their body up when receiving and making quick decisions.

Again, each time they restarted the drill the emphasis was on greater intensity and quality.

They then moved on to a 6 v 3 passing drill, with defenders urged to shut down the ball while the attacking side were instructed to move the ball quickly and with purpose. 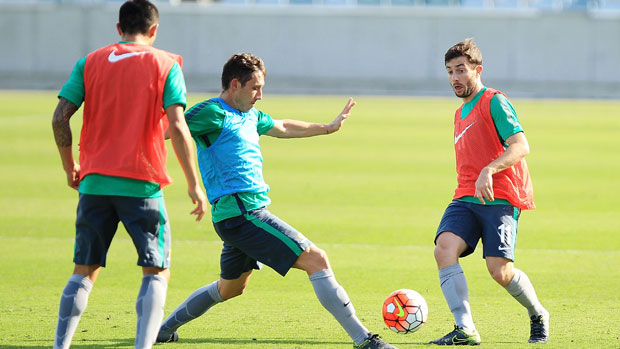 Players alternated between attack and defence with the group urged to maintain their intensity throughout.

After just under an hour the session was done as the players assembled for a stretch down and drink before it was up the tunnel to the changerooms.

With Matthew Spiranovic out of the squad through injury, only six more players are still to arrive in camp.

And Tuesday’s session will hold extra significance with training open to the public to watch at GIO Stadium, before the fans will get the chance to meet their Socceroo heroes for photos and autographs.