Australia has continued their free-scoring and barnstorming start to the Asian Cup, crushing a disappointing Oman 4-0 at Stadium Australia on Tuesday night.

In another clear statement the Socceroos are getting more confident in Ange Postecoglou’s style, they destroyed Oman in a devastating first half to book their quarter-final berth with a game to spare.

Matt McKay, Robbie Kruse and Mark Milligan all found the net in the first half before a goal for substitute Tomi Juric midway through the second completed the rout.

Remarkably, the eight goals the Socceroos have netted in the first two matches have been scored by eight different players.

The result means Australia only need a draw from the final group game with Korea Republic on Saturday night to top the group.

Postecoglou made three changes from the tournament opener, bringing in Milligan, McKay and Jason Davidson for Mile Jedinak, James Troisi and Aziz Behich.

And like Friday night it was a slow start by Australia, with only a superb full-length save by Mat Ryan keeping out Raed Saleh’s rasping drive early on. 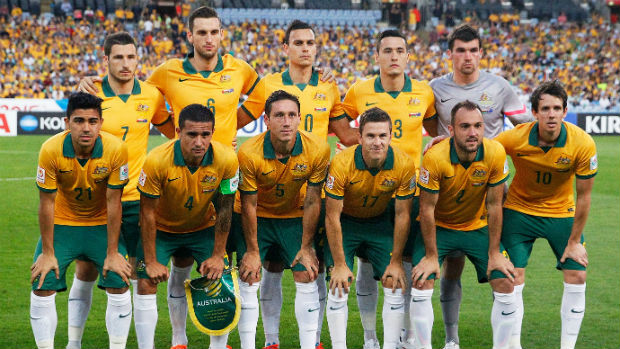 It took almost 20 minutes for the hosts to find their feet and when they did they eventually put Oman to the sword.

On the half hour it was two as Kruse started and finished a brilliant move which had the crowd of 50,276 on their feet.

Luongo was again involved, sending Kruse through with a classy lofted pass over the top with the outside of his right foot which the Bayer Leverkusen man finished low and hard under Ali Al Habsi.

By now the Socceroos were flying and only the width of the post denied Kruse a second before Milligan made it three in bizarre circumstances first half stoppage time.

A flowing move ended with Milligan having an easy tap in at the far post but Japanese referee Ryuji Sato surprised everyone by already blowing for a penalty after Tim Cahill was fouled in the build-up.

It mattered little as Milligan buried his spot kick to have the result put to bed by half-time.

Even with Cahill and Luongo substituted early in the second half the hosts kept up the intensity throughout and added a fourth goal their industry merited.

Juric got himself on the score-sheet 20 minutes from time when he slid in at the far post after wonderful work by Mathew Leckie down the left.

Only the sharp reflexes of Al Habsi denied both Milligan and Juric from adding further gloss to the score late-on but it mattered little on a memorable night for the Socceroos.