Having enduring an injury-plagued first year at Craven Cottage, Socceroo striker Adam Taggart is back pushing for a spot in Kit Symons' first team at Fulham.

The 22-year-old has made his first appearances for the Championship outfit on their pre-season tour of Portugal, playing his first minutes against League One outfit Millwall and backing up against Aston Villa on the weekend.

Taggart played the second-half in his side’s 3-1 friendly win over the FA Cup finalists, helping to set up his side’s third goal, but more importantly coming through the match unscathed.

After a groin injury bedevilled his first season in London the former Hyundai A-League Golden Boot winner appears on his way back.

“A lot of people dread all the running of pre-season but it’s been fantastic for me, which sounds a bit weird,” Taggart told fulhamfc.com.

“I was obviously struggling last season with my groin but now I’m in the best condition I’ve been in for a long time. Mentally and physically, I’m in great shape. It’s a progression I’m hoping to continue.

“My body is 100 per cent now and I can progress and develop, get the shooting boots back on and contribute for Fulham this season.

“I had a good base of fitness the last few weeks and now it’s about getting the little details right – your finishing, your touches.”

Taggart has not played a competitive minute of football since he appeared at last year’s World Cup on the back of topping the A-League scoring charts for the 2013/14 season.

However the ex-Newcastle Jets striker says he’s at least been able to adapt to his new playing conditions over the last 12 months even though he hasn’t been playing.

“It was good to get back into the rhythm of a match and put all of our hard work of the last few weeks into a game scenario,” said the WA-born Aussie of the Portugal matches.

“It was hard work in the heat but it was important to get that under our belts and back into the swing of things.

“It reminds me a bit of Australia because most of our season is played in the summer. 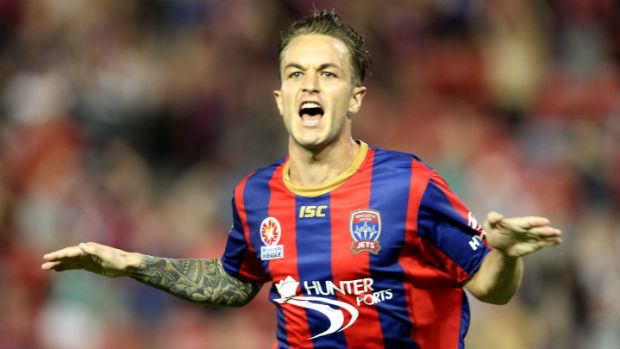 "I enjoy being out in the sun and it’s nice for pre-season. It’s a little bit harder than being in the cool air so in the end it will be good for us.

“I’ve got used to the fresh air in London but definitely out here it brings back memories of playing in Australia so it’s probably a bit easier for me to adapt.”

Fulham next play Crawley Town before embarking on matches in Austria and Germany.

The Whites open their season against Cardiff City in just over a month.