Tim Cahill says the Socceroos must get used to facing tricky challenges on the road to Russia against so-called minnow nations desperate to bring down the Asian champions.

Ange Postecoglou’s side made a winning – but largely unconvincing – start on their road to Russia with a gritty 2-1 win over lowly Kyrgyzstan in Bishkek who made things very tough for the Socceroos.

Speaking after the match Cahill, in his fourth World Cup qualifying campaign, says the side must adapt to being the hunted against every side in the region.

“It’s not going to get any easier. That’s not because of the crowd or the pitches but these are their biggest games,” Cahill told reporters.

“Whether you can take this as an example or not but when I was playing at Everton and we used to play Scunthorpe away and struggle to win, it’s the biggest game of their lives.

“That was their [Kyrgyzstan’s] time to shine, yet we stayed professional enough to get the result.

“It’s mixed feeling but not too negative. It would have been tough if we had lost, we would have reflected in a different way.”

Cahill, Australia’s greatest-ever goal-scorer, struggled to get into the match as he was starved of service from team-mates for much of the contest.

Kyrgyzstan’s central defence also of skipper Azamat Baimatov and Daniel Tagoe also made it very difficult for Cahill to get any space.

“I went to get a drink from the boss and the defender still tried to follow me,” Cahill said.

“Half of the time, even though he kicked me or whatever, you just smile at him because I remember being that kid when I was playing for Millwall against the [English] Premier League sides when I was in the second division.

“They’re not going to give you any breathing room.

“A lot of them are going to want to make themselves famous, whether it’s through a tackle or scoring a goal that is going to make their country.” 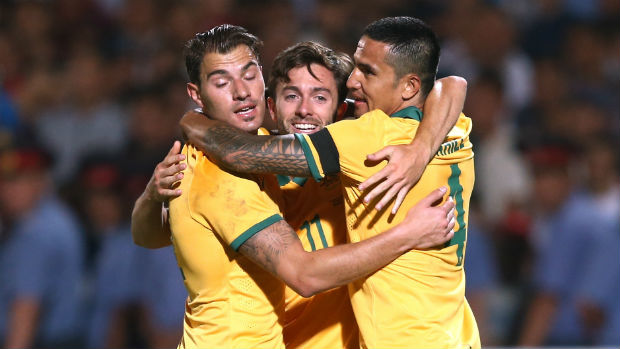 After only booking their spot to Brazil in the very last qualifying match, Cahill says a little of the pressure is now off the side with three points already in the bag.

The 35-year-old gave special praise to Oar for helping to change the game when introduced into the fray early in the second half.

“For me, tonight was Tommy’s game. Even though people might think he was only on for 20 minutes he gave us a breath of fresh air,” Cahill said of Oar.

“Even though he was shooting from 30 yards and at times the ball was running out of play his intent was really good.

“We talked about subs and how they can change a game and [Oar’s introduction] was massive change. It was a relief, his running with the ball, getting at them and the finish was the icing on the cake.”