Tim Cahill says the Socceroos loss to Jordan last month has galvanised the squad and was the wake-up call needed ahead of two crucial FIFA World Cup qualifiers over the next week.

First up for Ange Postecoglou’s side is Kyrgyzstan in Canberra on Thursday night followed by a likely trip to Dhaka to play Bangladesh next Tuesday.

The two matches have taken on great significance for the national team following their shock 2-0 loss away to Jordan in October.

The defeat has left the Socceroos with no more room for error, second in the qualifying group and four points behind Jordan, although with a game in hand.

“We had a wake-up call against Jordan which is probably something we needed,” Cahill told reporters at Parliament House on Monday.

“I’m always confident in this group of lads and the staff purely because of what we have achieved in the past and what is expected of us in the future.

“You don’t like the wake-up call but it has to galvanise you either way,” he added.

“We’re under a little bit of pressure now but it’s not something we haven’t faced in the past. I suppose we can only put it right by getting a win.”

Cahill feels the defeat in Amman was a “little hiccup” and he’s expecting a big reaction in front of what should be a big Canberra crowd on Thursday night.

The Socceroos are expected to have little trouble in sweeping aside the 124th-ranked Kyrgyzstan on home soil, especially with skipper Mile Jedinak and ‘keeper Mat Ryan back in the squad.

But the 35-year-old talisman knows from experience not to take anything for granted.

Australia only narrowly escaped with a 2-1 win over Kyrgyzstan on the bumpy pitch in Bishkek in the previous qualifying clash between the two nations.

“Kyrgyzstan on the counter-attack are very good. They have a lot of technical players, the wingers [are good], the midfield is stacked and defensively they were very strong,” Cahill said.

“Jordan, when we played them, were very physical and they out-battled us a lot on the park. 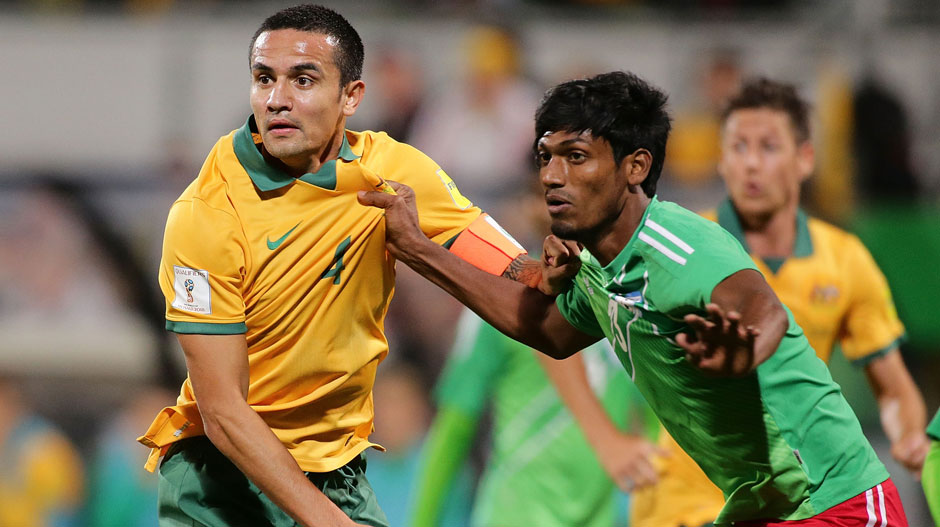 “We know we’re going to be up against a tough one against Kyrgyzstan, whether we’re playing at home or not.

“A lot of the teams we’ve played against lately, it’s been difficult but it’s never going to be an easy run.”

Only a handful of players who were in action on Sunday in Europe are yet to arrive in Canberra, with the likes of James Meredith and Tom Rogic in transit on Monday.

Postecoglou will put most of the 19 players already in camp now through the squad’s first training session at GIO Stadium at 4pm (AEDT) as preparations begin for Thursday’s match.

Tickets for the Australia v Kyrgyzstan match in Canberra are available at www.socceroos.com.au/tickets