The Socceroos have made a winning start to their World Cup qualifying campaign, holding off a determined Kyrgyzstan to record a hard-fought 2-1 win in Bishkek on Tuesday.

Goals in the first and second half respectively from captain Mile Jedinak and substitute Tommy Oar sealed all three points for Ange Postecoglou's Asian champions, who are attempting to reach a fourth successive World Cup finals at Russia 2018.

Australia made a flying start to the game at a packed Dolen Omurzakov Stadium in the early hours of Wednesday morning (AEST), charging forward from kick-off and winning a free-kick through Mathew Leckie, whose driving run ended in a body check by Azamat Baimatov.

Skipper Jedinak scored directly from the subsequent free-kick, his low strike kicking up off the uneven surface and eluding goalkeeper Valery Katsuba. 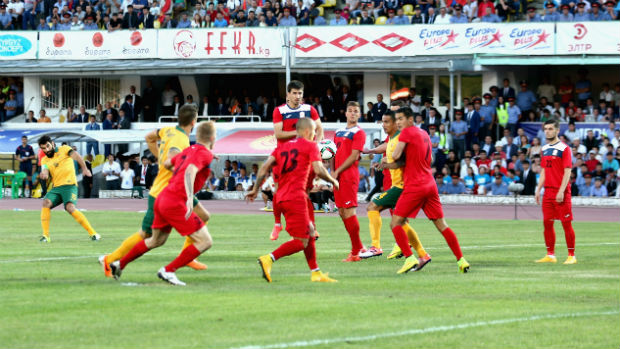 If head coach Ange Postecoglou or the visiting players hoped that early blow would break Kyrgyzstan's resistance before it had even begun, they would be disappointed.

The Central Asian side, ranked 177th in the world, mounted a forceful response and enjoyed by far the better of the rest of the half, creating dangerous opportunities and threatening Mathew Ryan's goal on several occasions through the likes of Mirlan Murzaev and Vitalij Lux, with Anton Zemlianukhin pulling the strings.

Australia by contrast barely mustered another opening after the move that led to the first goal, as Kyrgyzstan's daring high defensive line and offside trap denied time and space to the Socceroos' midfielders and forwards.

It was more of the same from the hosts after the break, Murzaev in particular rampaging down the left and winning a succession of corners in the first 10 minutes of the second half.

The 25-year-old went close to equalising with a back-heeled attempt after being found by a long throw in the 53rd minute. It took a fortuitous block and some more desperate defending to scramble the ball away, a familiar story for Australia's overworked backline.

Seeking to wrest some of the momentum back in his team's favour, Postecoglou introduced Oar in place of Nathan Burns in the 56th minute. The substitution paid off handsomely as the free agent, who left Utrecht at the end of last season, began to cause the hosts problems with his pace and directness on the left flank.

Just 10 minutes after coming on, the forward was released in behind the Kyrgyzstan defence by an outstanding Mark Milligan through-ball. Oar received the delivery, raced clear of his nearest opponent and slotted a good finish beyond Katsuba and into the far corner of the net. 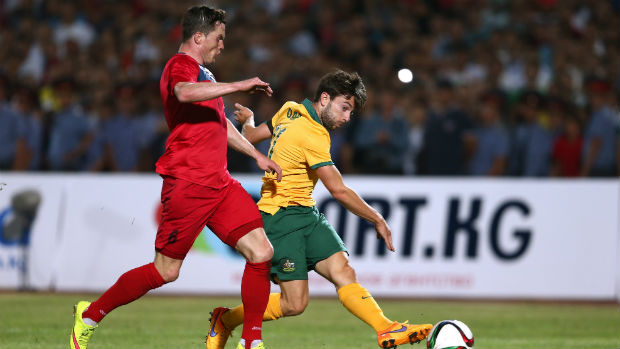 It was harsh on Alexander Krestinin's side, who had dominated the game since going behind without managing to force the goal their tireless efforts deserved.

When they did finally breach the Socceroos' backline, it took a handball by substitute Almazbek Mirzaliev to bundle the ball home at the back post from an injury-time corner. The infringement went unnoticed by the match officials, but effort arrived too late for the home team to mount a comeback.

Kyrgyzstan's vocal supporters must console themselves with memories of an entertaining clash against the regional heavyweights, while Australia's attentions turn to a home game against Bangladesh in Perth on September 3, when Postecoglou is likely to demand a far more measured, assured performance from his troops.