Australia Post Executive General Manager Retail and Football Australia Director, Catriona Noble said: “Like every Australian sports fan, we are thrilled the Socceroos have qualified for their fifth consecutive FIFA World Cup™ building on a rich history and tradition.

"Our stamps pay tribute to all those who have donned the national uniform as Socceroos and proudly represented their country in this sport.”

The stamps, to be released on 19 July 2022, show Australia’s first national team which was formed in 1922, following a tour invitation from New Zealand, and the current Socceroos team recently qualified for the FIFA World Cup Qatar 2022™.

The stamps were designed by Jason Watts of the Australia Post Design Studio.

Football Australia Chief Executive Officer, James Johnson, said: “Since the first ‘A’ international match back in 1922, our men’s national football team has represented Australia with great pride on the global stage, creating some of country’s greatest ever sporting moments.”

The Socceroos are arguably Australia’s favourite national sporting team and over the past 100 years, the composition of the team has reflected the changing face of Australia and unified a nation like no other sport or team.

“We would like to thank Australia Post for acknowledging the achievements and history of the Socceroos through the release of these two commemorative stamps, and I’m sure they will be a hit with football fans, as we celebrate the Centenary of Australia’s senior men’s national football team throughout 2022,” Johnson concluded. 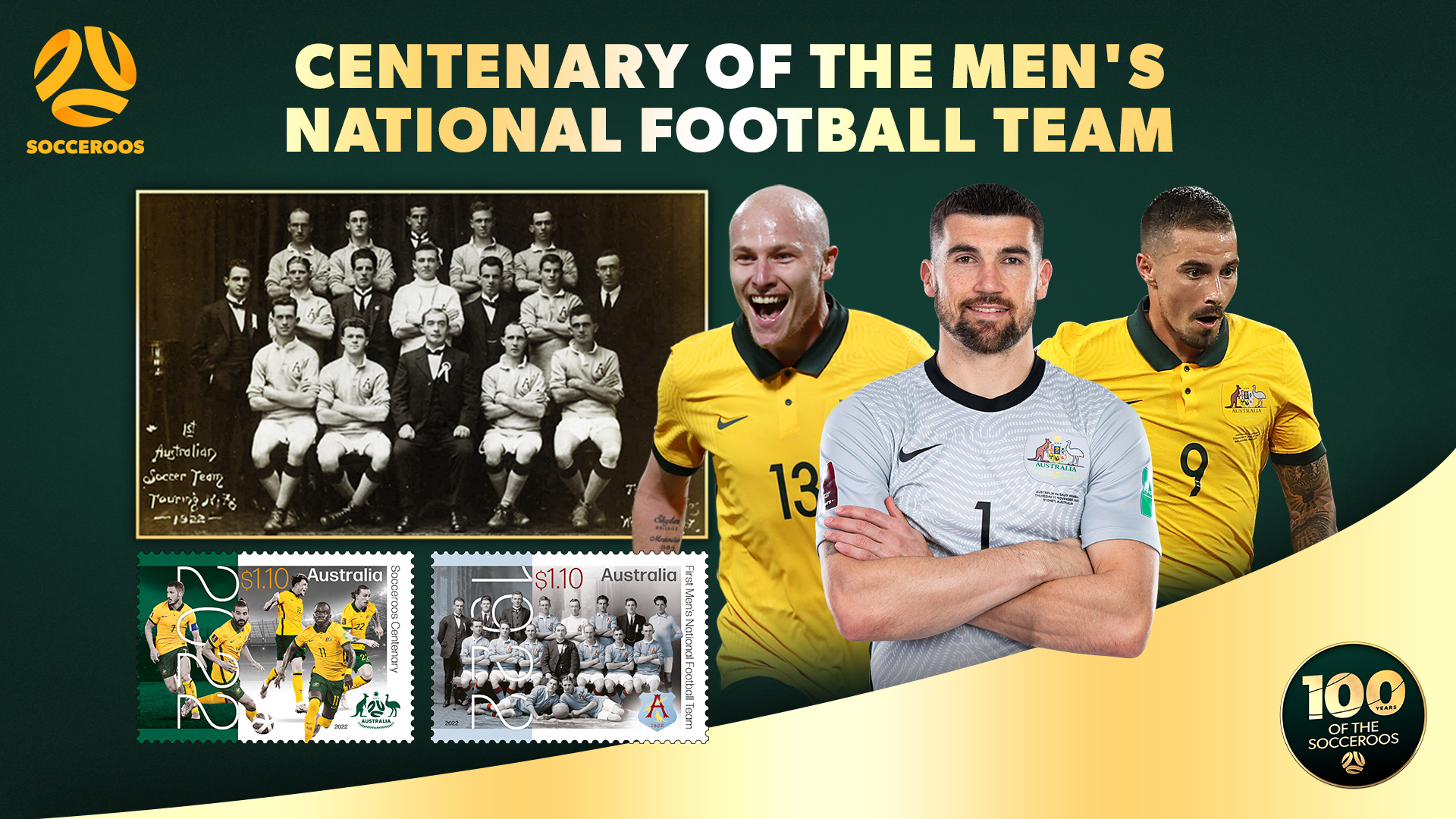 The stamp photograph resides in the Nelson Provincial Museum, New Zealand and has been colourised with blue and maroon; the original uniform incorporated playing colours of Queensland and New South Wales, the states from which the first team was drawn. The original pocket emblem, graphically reproduced on the stamp comprised elements to represent nations of the tour.

This stamp shows current Socceroos’ footballers in action, in photographs captured by Noufal Ibrahim in Kuwait. The design incorporates the retail version of the team emblem and colours from the Socceroos’ official palette. The team montage shows the vibrancy and athleticism of the sport.

The stamps and associated collectables, including a minisheet, first day cover, stamp pack and set of maxicards, are available now for pre order online, and from 19 July 2022 at participating Post Offices, via mail order on 1800 331 794, and online at auspost.com.au/stamps, while stocks last.

The Socceroos to play their final game in Australia prior to contesting the FIFA World Cup Qatar 2022™ on Thursday, 22 September (8.00pm AEST kick-off) against New Zealand’s All Whites, with tickets going on sale this week.

This match will also double as a Centenary celebration, with a series of events and activities to reflect, respect and commemorate the rich history of the Socceroos.

Socceroos vs New Zealand All Whites