If disaster strikes and the Socceroos run out of wingers at the Asian Cup or beyond, there could be a battle of wills between coach and player in the dressing room, with Tomi Juric adamant he's totally wasted in a wide position.

Fortunately for now Ange Postecoglou has at his disposal an abundance of attacking talent comfortable on the flanks, with Robbie Kruse and Mathew Leckie starring in the victories over Kuwait and Oman.   Nathan Burns and Tommy Oar have replaced them off the bench to good effect and few would deny a tactical tweak from Postecoglou, one that has seen Australia's front three play narrower than they did at the World Cup and early in the coach's tenure, has been anything less than a roaring success.

"For the wingers to be so narrow, it gives us strikers support when we secure the ball," Juric told Goal Australia when quizzed on the team's new style in the final third.

"So when the ball gets to us, we've got our wingers who are rolled in. It gives us someone we can lay off to when we've got our back to goal.

"Also, in that respect, when they're rolled in, they can run straight in behind. There's a few advantages in that regard.

"It's important that if we get our wingers rolled in then our wing-backs are going up and overlapping to give that support out on the wing." 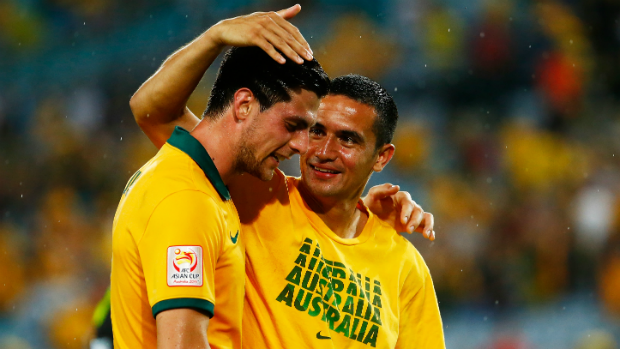 Leckie and Kruse have demonstrated themselves to be comfortable and dangerous on either wing during the first two matches of the tournament, while Burns and Oar are likely to take any minutes they can get off the bench, with the German-based pair clearly two of the first names on the team sheet.

With that fierce competition for attacking roles in mind, ordinarily a relative newcomer to the international scene would parrot the clichéd line that they are happy to play any role assigned to them by the coach. Not so Juric, who dismissed out of hand suggestions he could be deployed on the flanks.

"That's definitely not my role," he said.

"My abilities aren't structured to that kind of position. Burnsey's been playing like that at Wellington, Krusey, Leckie, Tommy Oar, they've been doing great in those positions as well.

"As a striker, we live off goals. That's our bread and butter. Every time I step on the pitch ... I have to be around the goal because that's where I'm going to score."
Having stated firmly that he's only interested in playing through the middle, Juric knows he faces stiff competition to earn a berth in the starting XI, with no less a figure than Australia's all-time leading scorer, Tim Cahill, ahead of him in the pecking order.

For now Juric, who came on in each of the Socceroos' first two matches and scored against Oman in Sydney, is content to bide his time and learn from one of his country's greats.

"Timmy, you just have to keep an eye on the way he moves in the box," Juric said.

"Because he's so lethal at jumping and getting his head on the end of crosses. For myself it's a good learning tool to watch that and learn as much as I can from it."

Playing a role in Australia's quest to lift silverware on home soil was a journey that started in the low-profile surrounds of the 2013 East Asian Cup, where Juric was handed a full international debut by Holger Osieck and rewarded the German's faith with a goal against Japan.

But did he know that was the beginning of a path to representing the national team on the big stage, albeit under a different coach?

"I believed it was," he said. "I believed I could do it and I believed the chance was there for me to take. Now I've been fortunate enough to be selected and that was my goal. My goal was to make the Asian Cup and I've done that. I've been successful in that."

"Now the next step is to perform well ... to put myself on a platform to be selected for the Socceroos regularly. You have to perform well for your club ... that's the same for every player who plays for the national team. If I can do that and continue playing well on a regular basis, the sky's the limit I guess."

The question of where Juric will be playing his club football next seasons remains up in the air, the striker having rejected a move from Western Sydney Wanderers to Shanghai Shenhua in favour of a likely free transfer and potential move to Europe at the end of the campaign.

His future is likely to be a subject of considerable interest to Postecoglou and Australia's supporters alike in the coming months and years, with his status as Cahill's heir-apparent set to grow after each impressive performance.