Mitch Langerak was the hero as a 10-man Borussia Dortmund beat Bayern Munich in a dramatic penalty shootout to advance to the DFB Pokal (German Cup) final.

The Socceroo gloveman was flawless throughout, making a number of clutch saves, including one from Thomas Muller in extra-time to keep Dortmund alive.

And in a crazy shoot-out he was unbeaten on all four Bayern attempts. 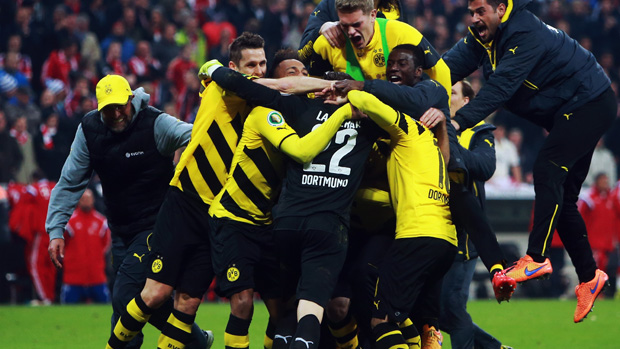 The victory maintains an incredible run for the 26-yearl-old against the German giants Bayern.

In four matches he has played against them in the Bundesliga and DFB Pokal, Langerak has never been on the losing side.

Langerak wasn’t the only Aussie in action on Wednesday morning (AEST).

Adam Federici was left on the bench as Reading lost 2-1 away to Rotheram while fellow ‘keeper Mark Birighitti kept a clean sheet as his AS Varese beat Virtus Entella 1-0 in Serie B.

Aziz Behich Bursaspor lost their Turkish Cup semi 2-1 against Fenerbache, with the left-back playing for 80 minutes.