Socceroo winger Mathew Leckie has arrived in Perth on a high after belting a stunning winner for his Bundesliga club on the weekend.

Leckie arrived in camp in Perth on Monday night fresh from opening his Bundesliga scoring account with a howitzer in FC Ingolstadt’s 1-0 win over Augsburg on the weekend.

The 24-year-old unleashed a thunderous left-foot shot which arrowed into the top corner in a spectacular way to get off the mark.

Asked about his stunning strike, a buzzing Leckie told reporters on Tuesday: “It was a big achievement.

“I had a few games [in the Bundesliga] with ‘Gladbach [Borussia Monchengladbach] a few years back but I wasn’t able to score.

“It was a good goal and I’m happy to score like that for the first one. It’s something I’ll never forget.”

Socceroo fans would now love to see Leckie translate that kind of strike into while wearing national team colours.

While one of the sides most devastating players over the last 18 months, Leckie has managed just one goal in his 24 appearances for the Socceroos.

“I want to score for the national team and play well and scoring has been something missing but I guess I’m also playing to put in good performances,” Leckie said on Tuesday.

“That’s something I’ve been able to do consistently and is one of the main reasons why I’ve kept my spot.

“I’m definitely going to be excited to score again for the national team but I don’t let it worry me too much.

“It’s always nice to score but if I can set goals up as well it’s just as important as scoring.

“It’s two things I want to be doing for my country and playing in an attacking role there’s things I need to be doing. Scoring has been lacking for the national team…hopefully it will come soon. 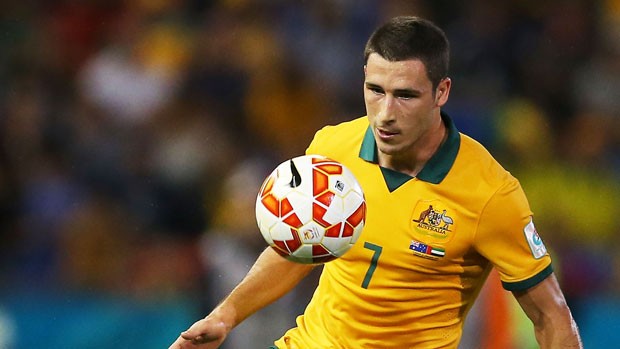 Leckie was just starting high school the last time the Socceroos played a match in Perth and says the players are happy to be in the west to spread the football gospel this week.

It’s the first time since winning the AFC Asian Cup in January the Socceroos will play at home and the pacy winger admits returning home brings back a lot of good memories.

After battling to a win away in Kyrgyzstan in June – and with tough trips to Tajikistan and Jordan to come in qualifying – Leckie believes it’s vital the squad cashes-in in front of their home fans in Thursday night's 2018 FIFA World Cup Russia™ Qualifier at nib Stadium against Bangladesh.

“The away games are really tough; we saw that in the last game [against Kyrgyzstan]” the former Adelaide United player said.

“Obviously we won but it was a very tough game.

“We have to be very dominant at home, hopefully control the game and play well. That’s the plan. The fans are coming out to see us; we have to put in good performances.

“Last time we played in Australia was in the Asian Cup and we put in great performances right throughout the whole tournament. We’re very confident to play at home, we love playing in front of the fans so we’re looking forward to it.”