The Young Socceroos are into the final of the AFF Under-19 championships after a fabulous win over tournament hosts Vietnam overnight, with Sydney FC and Wanderers players starring.

A first-half blitz form Ufuk Talay’s side was the difference as they surged to a 3-0 lead at the break before going on to win 5-2 at the Hang Day Stadium.

Skipper George Blackwood (Sydney FC) and midfielder Mario Shabow (Wanderers) both scored doubles before Joseph Champness ensured there would be no late comeback from Vietnam with the final goal six minutes from time.

The victory sets up a berth in Saturday’s final against Thailand, who beat the Young Socceroos 5-1 in the group stage.

“It was a very good first-half. We are here to be challenged and Vietnam came back in the second half which was very good,” Talay said.

“We made some changes in the second half and that changed the face of the game.

“But we need to make them so as to avoid risking injuries.”

After an even start to the contest, the Young Socceroos went in front midway through the first half when Connor O’Toole beat one defender on the left and crossed to Blackwood for a simple finish.

It was 2-0 three minutes later when excellent play by Champness led to Shabow to pounce with a clinical finish.

Shabow had his second 10 minutes before the break with Blackwood laying it off to Shabow on the edge of the area and he cut inside onto his right foot and curled a pinpoint finish into the bottom corner.

The Young Socceroos continued their dominance after the break and Blackwood had his second on 53 minutes after the hosts only half cleared a corner, with the Sydney FC attacker outjumping his defender to head home from close range. 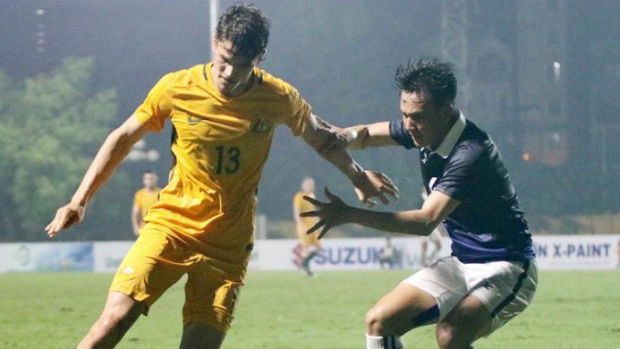 Two quick goals from Vietnam set up a tense finish but Champness eased any nerves on 84 minutes as he slid in at the far post to sweep home O’Toole’s cross.