The Socceroos blew China away in a devastating 16 minute spell with superstar striker Tim Cahill scoring twice - including a candidate for goal of the tournament - to win their Asian Cup quarter-final 2-0 at Brisbane Stadium on Thursday night.

The victory sets up an Asian Cup semi-final next Tuesday in Newcastle against either Japan or the UAE.

After his world-class goal at the World Cup in Brazil against Holland, Cahill did it again with a moment of genius to prize open the stubborn Chinese just after the break.

An unbelievable bicycle kick with his back to goal will go down as one of Australia’s great goals. And vital too after the Chinese had shown they are a rising force under coach Alain Perrin. 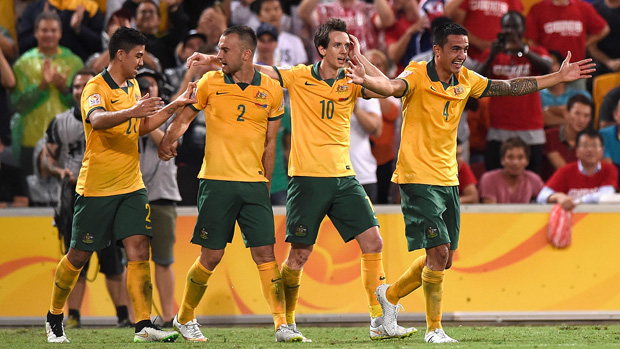 A trademark powerful header by Cahill sealed the victory  on 65 minutes and doused a stubborn Chinese side who showed plenty of fight in front of their many fans.

Entering the pitch to light rain and thunderous noise from both sets of fans, the scene was set for an Asian Cup classic.

The Socceroos were back in their green and gold kit while China sported a stylish all white with red trim.

The Aussies had a fresh look about them too with Mark Bresciano in for his first start of the Asian Cup and skipper Mile Jedinak back from injury.

Alex Wilkinson was in for the suspended Matt Spiranovic, Robbie Kruse came back into the starting XI and Jason Davidson won the left-back battle.

It was a nervy opening for Australia as China rose to the occasion in front of their loud fans, numbering roughly half the 52,000 seat Brisbane Stadium.

An early scare saw Mat Ryan forced to rush a clearance under pressure in his six-yard box. Then Wilkinson’s perfectly timed tackle averted danger after the pacy Wu Lei burst through. 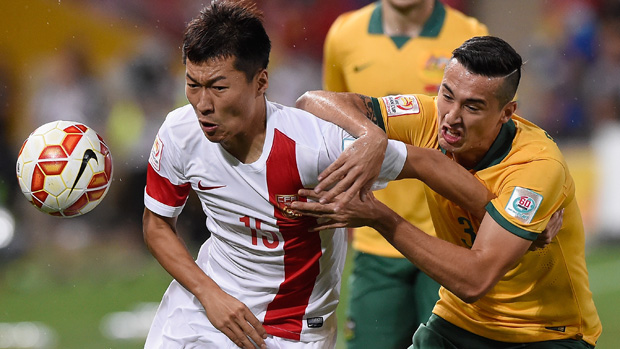 Adding to the worried looks on the Socceroo bench, Wu Lei profited from a loose ball by Jedinak but his run and shot was deflected wide for a corner. And minutes later Zhang Chengdong’s cut back almost resulted in an opener for China as the team in white sensed an upset.

Minutes later the Socceroo skipper was yellow carded but this seemed to change the game as Australia came back into the contest in the second half of the first stanza.

Bresciano was the creator. His curling set-piece wide left found the head of Jedinak but his downward header just missed its mark.

Again Bresciano with a pin-point set piece from his right boot found Trent Sainsbury who powered his header just over.

And Cahill met a perfect Leckie cross but danger was averted for China as his header was unable to find its mark.

But Australia’s best chance came on 28 minutes as the home fans found their voice.

It was 0-0 at half-time after a tense, tight and at times scrappy first 45 minutes..

No changes to the Socceroos at half time as they immediately went on the attack.

Then, a moment of pure magic.

After a corner was cleared by China, Ivan Franjic’s looping header back into the box found Cahill to the left of goal. He met the ball with his back to goal and deft right-footed bicycle kick  arrowed across goal and into the opposite side of the net.

Brisbane Stadium erupted - a corner flag was uprooted by Cahill and he was mobbed by his teammates.

The Socceroos were soon playing with a swagger as they threatened to open up China again.

Zhang Linpeng dragged down Leckie and got a yellow card for his troubles as the Aussie burst through on the edge of the D.

Then Bresciano missed a perfect opportunity to make it 2-0 after Cahill fed Leckie who in turn fed Bresciano who blasted over. He then left the pitch to a rapturous round of applause when subbed off for James Troisi just on the hour mark.

Cahill’s went close with brilliant turn and shot was parried wide by the keeper as the Socceroos turned the screws.

Wang Dalei kept them in the game with another great save as the Aussies managed to silence the large Chinese support.

But on 65 minutes the Chinese resistance was broken again.

Davidson with a perfect cross for Cahill near the penalty box and his angled head down beat the keeper to his left.

It was 2-0. And the Aussies could sense a semi-final was theirs.

China had been blown away by Cahill in a devastating 16 minute spell.

With 11 minutes to go the Aussie hero left the field to an incredible noise from the home supporters.

China didn’t drop their head and kept chasing the game in the latter stages with Ryan called into action on 70 minutes to keep China out.

But with space opening up the Aussies should’ve easily made it three. Mark Milligan, a second half sub, with a golden chance after a brilliant run through the Chinese defence which crumbled in the latter stages of the game.