A bitterly disappointed Caltex Socceroos keeper Maty Ryan said Australia did not stick to their “fundamentals” in their 2-2 draw with Thailand.

Speaking after Tuesday night’s World Cup qualifier in Bangkok, the Valencia keeper was left frustrated after the Thais almost caused a huge upset.

“Very disappointing once again. We go away from our fundamentals again,” he told Fox Sports.

“We can say all we want about the build up and we’ve set our standards as a team and to come here and expect to do better.

“But we have to follow it up on the pitch. Too many cheap turnovers tonight and with a couple of quick players they are going to hit us on the counter and we’re going to be pretty open.”

Australia started commandingly taking the lead on seven minutes but the Thais worked their way back into the game to take a 2-1 lead by the 57th minute.

A Mile Jedinak penalty, his second of the night just after the hour mark, spared their blushes. 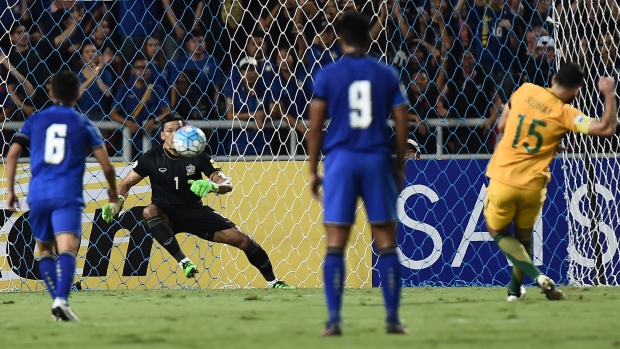 And Ryan came to the rescue with just minutes left, blocking a near certain goal in a one-on-one.

“At the end of the day it’s not good enough,” added a clearly frustrated Ryan.

“The result shows that.”

Ryan said that if Australia go back to what they do best, then qualification should be achievable with three out of the next five games on home soil.

“We need to look at ourselves. We need to give more,” he said.