Celtic have claimed another point in the UEFA Champions League, drawing 1-1 at Borussia Monchengladbach, with Caltex Socceroo Tom Rogic again starting for the Scottish champions.

Rogic played 68 minutes for Celtic in Germany as the visitors came from behind to avoid defeat thanks to Moussa Dembele's 76th-minute penalty.

The draw took Celtic to two points from four matches in Group C, two adrift of third-placed Gladbach, with Barcelona (9) and Manchester City (7) well ahead in the standings.

Having scored an excellent goal for Celtic over the weekend to claim victory against Aberdeen, Rogic was unable to have a huge impact on the match at Stadion-im-Borussia Park on Tuesday night.

Rogic was today named in the Caltex Socceroo squad for the World Cup qualifier with Thailand on November 15 in Bangkok. 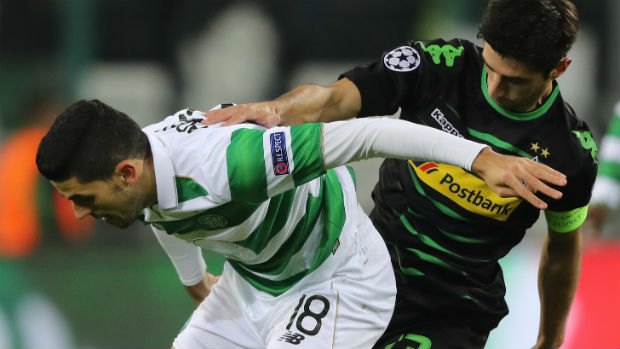 Elsewhere, Australian midfielder Andy Rose came off the bench for Coventry City to inspire a 2-0 win over Chesterfield in League One.

Rose replaced Marcus Tudgay in the 67th minute and just two minutes later won a header at a corner and although that was blocked, Coventry kept the ball alive for Jordan Willis to score.

Having only returned from a knee injury over the weekend, Rose made it two goals in as many matches when he fired home from the edge of the area in the 81st minute.

The win stretched Coventry's unbeaten run to four matches and took them up to 18th in the table, three points clear of the relegation zone.