The playmaker played a starring role as Brendan Rodgers’ side thumped Kazakh outfit Astana FC 5-0 at Celtic Park in the first leg of their UCL playoff tie.

After being frustrated by the visitors for the first half hour, Rogic broke the deadlock for Celtic with a brilliant piece of individual skill in the 32nd minute.

The midfielder drove into the box and weaved his way past several defenders before dinking a delightful ball over Astana keeper Aleksandr Mokin from a tight angle.

The ball appeared to be destined for the back of the net but an Astana defender got the final touch and it was eventually credited as an own goal.

The goal settled the hosts and they doubled their advantage less than 10 minutes later with Scott Sinclair neatly converting following a deflected pass from Rogic.

The hosts ran riot after the break with Sinclair completing a brace on the hour mark before goals to James Forrest and Leigh Griffiths put the stamp on a dominant performance.

Rogic suffered a nasty clash of heads in the lead up to the third goal and was eventually forced off as a precaution.

“His goal was a great goal. It was similar very much to the Scottish Cup Final goal where he broke into the box and got his finish,” Celtic boss Brendan Rodgers told Bein Sports.

“That was an important goal for us. It settled us down. Then we were able to make better passing options and create more chances.” 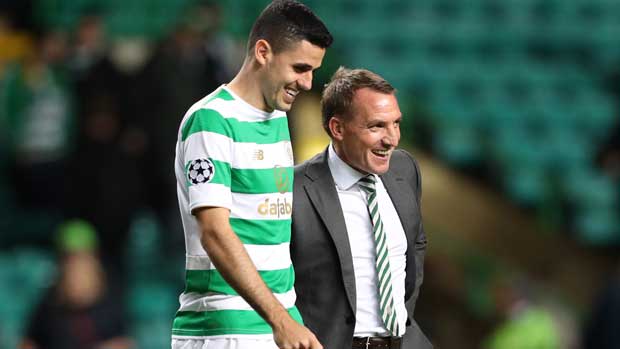 Celtic are back in league action at the weekend when they travel to Kilmarnock before heading to Kazakhstan next week for the return leg where they can book their spot in the UCL main draw.