Rogic came on for QPR’s Massimo Luongo with just over 20 minutes left in Adelaide in the World Cup qualifier on Thursday night.

And fresh from his world-class winner for Celtic on the weekend, the elegant midfielder tormented the Tajiks with two goals inside three minutes - and he should've even got a hat-trick with another couple of efforts as he ran amok.

Rogic clearly sent a message to coach Ange Postecoglou that he wants to start in the group decider on Tuesday night against Harry Redknapp’s Jordan in Sydney.

“Obviously you want to be starting,” Rogic told Fox Sports.

“But you have to be ready to come on and it’s always a privilege to play for your country.

"And I was just trying to be positive and lucky to get a goal or two ... I’m not sure!

“Two is nice, but it could’ve been three or four.

“I would’ve taken that before I went on so I’m delighted,” he said.

J-League based striker Nathan Burns also bagged a brace in the second half to take his national team tally to three goals.

The FC Tokyo man echoed Rogic’s comments, saying it could’ve been more than 7-0 after the Green and Gold hit the woodwork four times 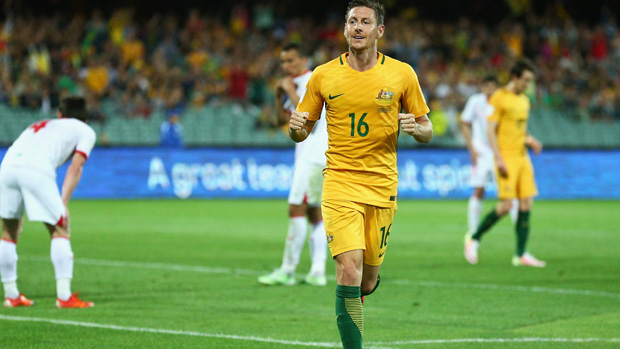 “A lot of goals tonight and probably it could’ve been more. It’s great to be back.

“ I wanted to get a few more but every goal for the national team is a great honour," Burns told Fox Sports.

The Aussies now head to Sydney for the group showdown with Jordan confident they can take all three points.

Jordan was set to play Bangladesh in Amman a few hours after the Australians' game.