The group also features Saudi Arabia, UAE, Iraq and Thailand, and has been touted as the tougher of the two pools in Asia's third and final stage on the road to Russia.

Risdon burst onto the national ranks with a debut against Bangladesh in Dhaka in November, followed by the Socceroos’ clash against Jordan in Sydney last month.

Despite being excited by the draw, the 23-year-old right back was focused on making the squad first.

“Hopefully I can be involved in some of those games,” Risdon said.

“It’s going to be a very tough group and hopefully I can test myself against some of those good teams.

“Japan, Saudi Arabia and UAE probably will be the toughest of the lot.”

If selected for the Japan match at home on October 1, the Bunbury-born defender would most likely face some of Europe’s best players; including Leicester City’s Shinji Okazaki, AC Milan’s Keisuke Honda and Borussia Dortmund’s Shinji Kagawa. 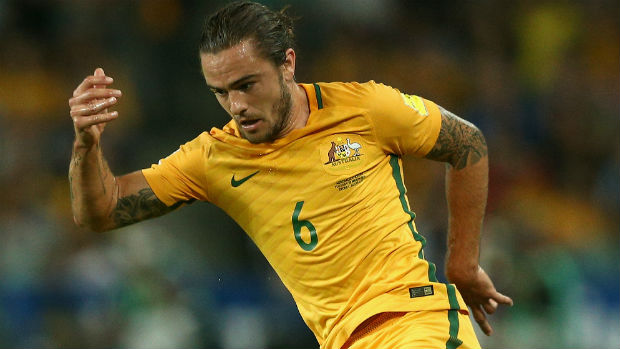 The Perth Glory skipper was thrilled at the prospect of playing world class opposition.

“That’s what you want to do, you want to play against the best players possible,” he said.

“Hopefully if I’m lucky enough to come against the likes of those players it would be unreal and a real milestone for my career.”

It wouldn’t be the first time Risdon has fronted up against world class opposition.

The defender played 45 minutes for the Hyundai A-League All Stars against David Moyes’ Manchester United in 2013, facing the likes of Robin Van Persie, Ryan Giggs, Michael Carrick and Danny Welbeck.

The Socceroos face Iraq and the United Arab Emirates in early September but before the World Cup qualifiers, Risdon will be pushing hard for selection in the blockbuster friendlies against world no.10 England in May and UEFA Euro 2004 Champions Greece twice in June.