Jordan coach Harry Redknapp said there was a clear gulf in class after his side were thrashed 5-1 by the Caltex Socceroos on Tuesday night in Sydney.

Australia cruised to an easy win at Allianz stadium to top their group in World Cup qualifiers and progress to the final phase of qualification.

“It was as difficult as I expected it to be,” Redknapp told reporters after the game.

“There was a big gulf in class in all honesty tonight. We stepped up a level tonight and it was difficult.

“They [the Socceroos] looked much fitter. Australia looked great tonight.

“But if Australia played Spain next week you’d be looking at them and thinking they’re not very good.

“That’s how the game is. Australia have been in the big competitions over the years and the quality tonight it was the difference.” 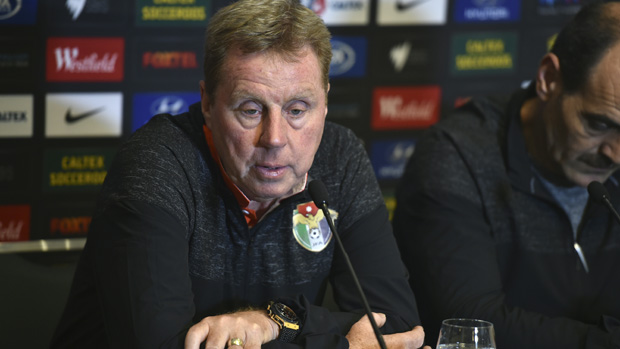 The former Spurs and QPR boss added Jordan became “ragged” after the deadlock was broken in the first half by Tim Cahill, followed in quick succession by two more as the Socceroos took a 3-0 half-time lead.

“We lost our way then. You need to be solid to not concede another goal but we did,” he said.

Jordan must now hope they they can qualify through the back door as one of the four-best runners up across the AFC groups.

Redknapp also urged the JFA to urgently address the lack of professionalism within the game in Jordan.

“The whole structure of the set up needs work. There is so much work needs doing.

“We had no analyst on the opposition, no sports scientist.

“The players all play in Jordan, most of them. They are short on fitness. So when they play better teams they struggle for fitness.