As the Socceroos prepare for their play-off tilt in June, we revisit the journey so far with every highlight from the World Cup Qualifiers.

The Socceroos head to Doha to take on the United Arab Emirates in a vital AFC Play-off on June 7, with the victorious nation set to face Peru a week later for a place at the FIFA World Cup Qatar 2022.

The winner of that match will lock in a place in Group D alongside defending Champions France, Denmark, and Tunisia.

Ahead of the Socceroos' June play-off tilt, here's your chance to revisit the highlights from every match on our journey so far. 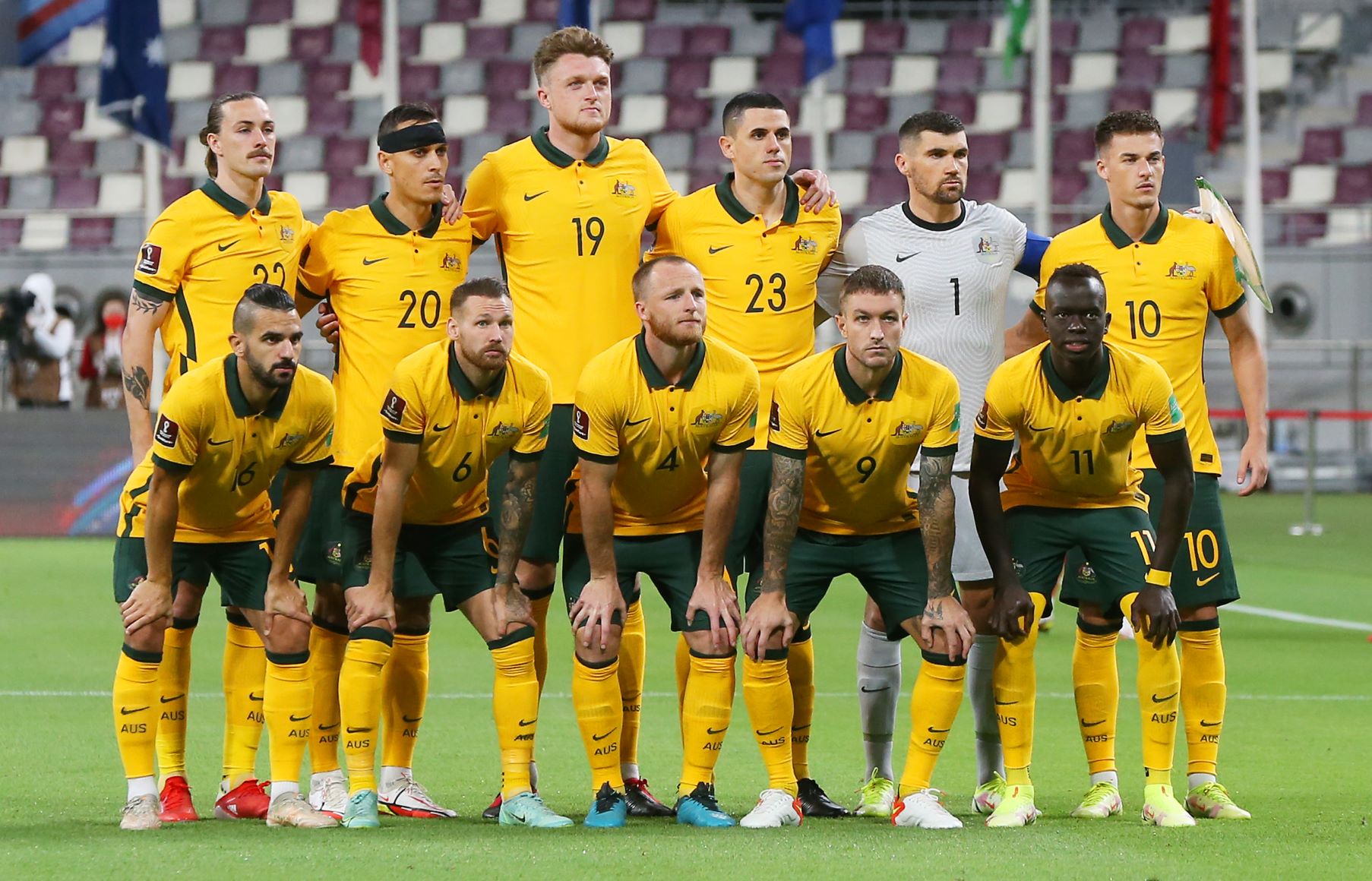 The Socceroos made the perfect start on the road to Qatar with a 3-0 win over Kuwait in Australia’s first FIFA World Cup 2022™ qualifier.

Souttar scored again from close range with the help of a huge deflection on 59 minutes and Maclaren's late strike completed the rout.

The victory in Australia’s only home match of 2019 made it a perfect six points from two games in Group B.

Adam Taggart, Jackson Irvine and Harry Souttar were at the double, while Jamie Maclaren was on the scoresheet again as the Socceroos continued their strong start to FIFA World Cup 2022 qualifying with a 7-1 win over Chinese Taipei in Kaohsiung.

Taggart headed in Rhyan Grant's cross and bundled Brad Smith's cutback over the line to give Graham Arnold's side a flying start before Chinese Taipei pulled a goal back through Chen Yi-Wei's bullet header.

Ajdin Hrustic also announced himself on the international scene with a hat-trick of assists off the bench late on.

History was against the Socceroos when they headed to Amman in November 2019 for their fourth match in FIFA World Cup Qatar 2022 qualifying.

Australia had never won an away match against Jordan before but Graham Arnold’s side delivered a fine display to turn the tables.

Adam Taggart’s early goal – his sixth in the green and gold – after a well-weighted through ball from Jackson Irvine was the difference in a 1-0 win.

The outstanding result continued the Socceroos 100% record, making it four wins from four on the road to Qatar.

The Socceroos marked their long-awaited return to the international stage in style, cruising to a 3-0 victory over Kuwait during their first FIFA World Cup Qualifier in 567 days.

The Socceroos secured six-straight international victories for the first time in 20 years as they maintained their perfect record in Qatar 2022 FIFA World Cup™ Qualifying with a 5-1 victory over Chinese Taipei.

The Socceroos sealed a first-place Group B finish and a ticket to the third round of FIFA World Cup 2022™ qualifiers with a 3-0 win over Nepal.

Mathew Leckie and Martin Boyle scored on either side of Fran Karacic's maiden international goal, as the Socceroos eased to victory against a Nepal outfit reduced to ten men after Rohit Chand received a red card for fouling Boyle on the cusp of half-time.

The result took Australia out of the reach of Jordan - the second-placed side in Group B - with just one game to play, ensuring Graham Arnold's side progress to the next round of qualification and clinch a spot at the 2023 AFC Asian Cup.

An outstanding performance saw Australia get off to a red-hot start in Round 3 of FIFA World Cup qualifying, as they registered a 3-0 victory over China PR.

A clinical display from the Socceroos saw them get the job done against China PR in Doha.

In hot and humid 29 degree conditions in Hanoi, Australia capitalised on their almost 70% possession to defeat Vietnam.

Australia became the first nation to register 11-straight wins in a single FIFA World Cup qualifying campaign as they defeated Oman 3-1 at the Khalifa International Stadium in Doha, Qatar.

With just under ten minutes played, Awer Mabil opened the scoring with the first shot of the game as he pounced on a loose ball in the box and slammed a powerful shot into the net.

Oman found the equaliser just before the half an hour mark, but Martin Boyle restored the Socceroos' lead after heading home a parried Adam Taggart shot from close range.

Mitch Duke secured the three points with minutes remaining as he side footed home Fran Karacic’s cross inside the six-yard box.

Australia’s win streak ended in Japan with a 2-1 defeat to the Samurai Blue at the Saitama Stadium.

Despite a spirited fightback from the Socceroos, an early goal from Ao Tanaka and an own goal with five minutes remaining was enough to sink Australia to their first competitive loss since the Asian Cup in 2019.

Australia’s only goal came courtesy of Ajdin Hrustic, who lashed a free-kick over the wall and into the top corner to hand the Green and Gold an equaliser, but it was not to be.

After two years on the road, the Socceroos played out a 0-0 draw with Saudi Arabia in front of 23,314 fans at Western Sydney Stadium.

The Socceroos' first match on home soil since October 2019 produced a tight affair between two sides who were desperate to hold their positions at the top of Group B.

While there was a flurry of late chances for both sides, the deadlock was unable to be broken in wet conditions in Parramatta.

Australia's road to direct FIFA World Cup Qatar 2022™ qualification was dealt a blow after being held to a 1-1 draw by China in the UAE.

Mitch Duke's powerful first-half header looked to have the Socceroos on course for a crucial three points but China were awarded a penalty midway through the second half to level the scores.

The result meant the Socceroos had picked up two points from their previous three matches which left their hopes of automatic qualification for a fifth consecutive FIFA World Cup in the balance.

In front of almost 28,000 fans in Melbourne, the Socceroos returned to winning ways with an emphatic 4-0 victory over Vietnam.

Australia dominated from the outset with Jamie Maclaren and Tom Rogic both scoring in an entertaining first-half.

Substitutes Craig Goodwin and Riley McGree both scored their first international goals after the break to complete the rout as the side rediscovered their attacking mojo to snap their three-game winless run.

The Socceroos suffered another blow to their hopes of automatic qualification, with a 2-2 draw against Oman in Muscat.

Australia twice led through Jamie Maclaren and Aaron Mooy, but were pegged back by Abdullah Fawaz's double.

The result left Graham Arnold’s side needing to beat Japan and Saudi Arabia in their final two qualifiers to guarantee an automatic qualification spot.

In front of 41,852 vocal Australian fans on a wet and cold night at Stadium Australia, the Socceroos played out a heartbreaking 2-0 defeat to Japan.

Substitute Kaoru Mitoma popped up with goals in the 89th and 94th minute at Accor Stadium to book Japan’s direct route to the finals in Qatar.

Australia needed a win to leapfrog their opponents in the group, but it was not to be, and the result confirmed that the Socceroos need to navigate the play-offs to progress to the 2022 World Cup in Qatar.

Despite creating some solid chances, the Socceroos suffered a slim 1-0 defeat against Saudi Arabia to close off Group B.

Graham Arnold made a host of changes from the clash with Japan, as Bruno Fornaroli and Nathaniel Atkinson earned starting debuts for Australia while Nick D'Agostino made his Socceroos debut in the second half.

While the Socceroos created a number of opportunities, they were undone by a Salem Al-Dawsari penalty in the second half to suffer a third defeat in the group.