Clinical finishing was the difference in the Joeys’ 4-1 loss to Germany in their opening FIFA U-17 World Cup match, according to Australian U-17 head coach Tony Vidmar.

The Germans’ deadliness in front of goal was evident in the opening minutes of the match, going 1-0 up within a quarter of an hour. At half time, Germany was 3-0 up.

“We probably have ourselves to blame,” Vidmar said.

“We had good periods of possession, but not at times taking our opportunities to score.

“We faced a German team that’s very clinical; who took their opportunities better than us.”

The Joeys had a number of forays into Germany’s territory in the first half, but their profligacy in finding the final ball into the box, or getting a shot off cost them.

Vidmar praised the young Australians for taking the game to the Germans, but rued their inability to convert.

“At the start of the game, we were very positive,” he said.

“We have a very positive team.

“We have a mindset that we don’t fear who we’re going to play.

“Between the two 18-yard boxes, I thought there were a lot of times we actually had control of the game

“But our final execution let us down.” 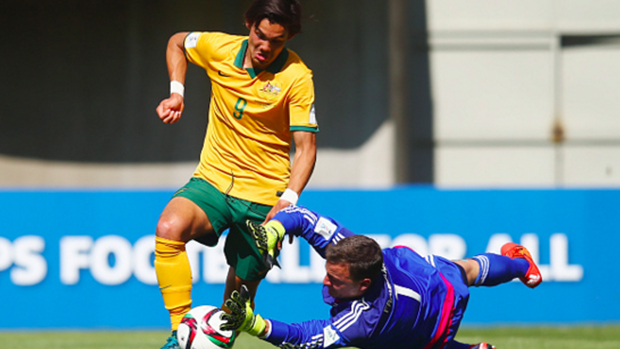 Despite the loss, Vidmar said his Joeys shouldn’t dwell on the loss, but needed to learn from their mistakes.

“We’ll address this game; we won’t forget about it,” he said.

“Then we can look forward to our next opponent in Mexico.

“We can take a lot of positives out of this game, and we need to make sure we do better where we let ourselves down.”

The Joeys’ attention now turns to Mexico on Wednesday afternoon [Thursday morning AEDT] in their second group game of the 2015 FIFA U-17 World Cup.