Having given the world champions a huge scare last week, Ange Postecoglou’s Socceroos have one more clash before they start their journey towards Russia 2018 when they face FYR Macedonia on Tuesday morning (AEDT) in a friendly.

The Socceroos will head into the clash in Skopje buoyant after that excellent performance and 2-2 result against Germany in Kaiserslautern on Thursday morning AEDT time.

On the other hand, Macedonia slumped to a 2-1 home defeat to Belarus on Saturday morning (AEDT) in Euro 2016 qualifying. The loss has FYR Macedonia fifth in Group C and well off the pace to qualify for next year’s tournament in France.

So it promises to be a tricky but useful test for the Australians who will face a side ranked much lower than them who have little to play for in this game.

However, one interesting sub-plot to the match is Victory defender Daniel Georgievski, who played 90 minutes against Belarus and would love to get a shot against his country of birth.

Winger Aleksandar Trajkovski plays his club football with James Troisi at Zulte Waregem and is one to watch down the flanks. It was Trajkovski who scored his nation's goal in the loss to Belarus.

Agim Ibraimi and Krste Velkovski are two others the Socceroo defence must keep under wraps if they want another positive result. 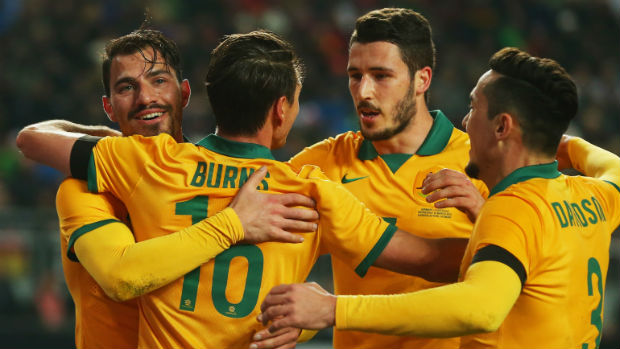 This will be just the second time the two nations have met at senior level, the last coming back in 1997 when a last-minute Aurelio Vidmar goal sealed a 1-0 win for the Socceroos.

And the Green and Gold will be confident of getting another positive result against the Bosko Durovski’s team, ranked 108th in the world -though you suspect it's not about the result, but about experimenting and tweaking the team's structures ahead of the games that really do matter.

The performance against Germany will have made many around the world sit up and take notice of the emerging Aussies, and Postecoglou will demand more of the same here.

Given the short time between matches there is likely to be a few changes to the starting XI in Skopje.

Melbourne Victory skipper Mark Milligan is on his way back home to Australia after picking up a knock on his knee in the draw with Germany.

Trent Sainsbury and Massimo Luongo weren’t risked against the Germans but should be right for at least a berth amongst the substitutes.

If they are fully fit through you would expect the pair to start, especially as arguably Australia’s two best performers during January’s Asian Cup triumph.

Postecoglou may rest the impressive Mat Ryan meaning Mitch Langerak or Adam Federici will get a rare start in the Green and Gold.

In defence, Adelaide United’s Tarek Elrich must be considered for a start at right-back given not-fully-fit Ivan Franjic's lack of football and his typically lung-busting performance against Germany, while Aziz Behich may get a shot in place of Jason Davidson on the left.

If Sainsbury is deemed fit he is likely to start, probably alongside Alex Wilkinson although debutant Luke DeVere and Bailey Wright showed against the world champions that they are up to the task. 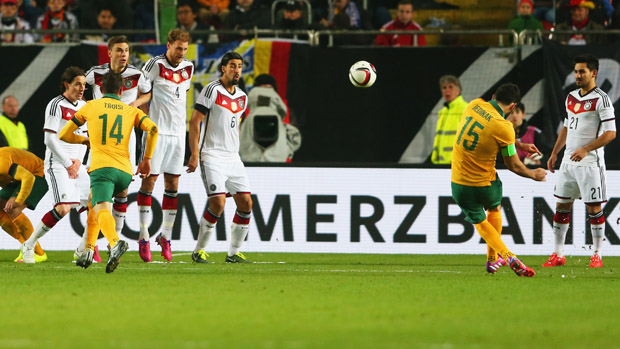 In midfield, Mile Jedinak will fill the holding role again but the other two spots in front of the Palace star will depend on Luongo’s fitness and how much Postecoglou will want to experiment. Knowing the "gaffer", he'll go for experimentation.

Melbourne City FC star Aaron Mooy has been superb in the Hyundai A-League and is the front-runner to take Milligan’s spot, although Oliver Bozanic is another candidate.

The attacking trio of Mathew Leckie, James Troisi and Nathan Burns gave the German defence all sorts of troubles and it would be no surprise if all three were retained in the starting side - especially with Tomi Juric still under an injury cloud, although FC Utrecht’s Tommy Oar – out of favour at club level – could do with a start, while youngster Chris Ikonomidis should get some game time as well.

Inconsistency has been a huge problem for FYR Macedonia lately, with them all but out of the running for Euro 2016 even at this early stage.

Their 2-1 defeat to Belarus on the weekend will have hit the side hard and Durovski may ring the changes in the hope of finding the right formula or looking to the future.

Continued improvement and attacking intent will be the message from Postecoglou, especially as their next match after this one will be a World Cup qualifier in June.

After this test in Skopje, the road to Russia is well and truly upon us.