The Caltex Socceroos meet the South American champions in a do-or-die match. Can they keep their Confederations Cup campaign alive with a first-ever win over a classy Chilean side?

1. The Caltex Socceroos have their semi-final destiny in their own hands; if they win by two goals, they’ll make the knockout stages.

2. These two nations have met five times, with Chile winning four games and one match drawn. Their last clash was Chile’s 3-1 victory at the 2014 World Cup.

3. Australia have conceded in the last minute of the first half in both of their matches at the 2017 Confederations Cup.

4. Caltex Socceroos star Tommy Rogic is the only player to score a goal from outside the penalty area at this year’s tournament, with the other 20 goals all coming from inside the box.

* There are no major injury worries in the Caltex Socceroos squad.

* Fatigue may play a part in Ange Postecoglou’s selections with the likes of Mathew Leckie, Aaron Mooy and Mark Milligan playing all 180 minutes so far, as well as travelling from Sochi to Saint Petersburg and now Moscow in less than a week. 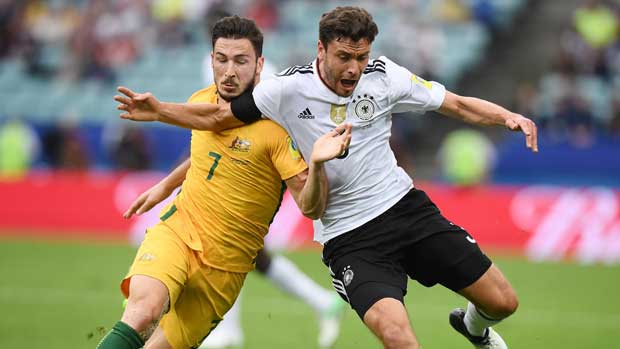 * Norwegian-based youngster Alex Gersbach seems set to retain his place at left wing-back after an eye-catching performance against Cameroon.

A two-goal victory will ensure their passage to the semi-finals, while a one-goal win would leave them relying on the result in the Cameroon v Germany clash.

Australia have shown at this tournament they have the ability to dominate higher-ranked teams.

But a lack of ruthlessness in the final third has meant those periods of dominance haven’t always translated into goals.

That has to change against Chile.

Lapses in concentration defensively – like the one which saw Australia concede against Cameroon – also need to be avoided, with the likes of Chilean superstar Alexis Sanchez ready to pounce on even the slightest error.