In September, Joeys Head Coach Peter Cklamovski led a group of Australia’s brightest young footballers overseas in a bid to qualify for next year’s AFC U16 Championships in Malaysia.

Up against Mongolia, Cambodia and Vietnam, the Joeys successfully topped their group, and can now look forward to competing at the highest-level Asia can offer their age group next year.

Recently we sat down with Cklamovski to talk through mission Mongolia, and to discuss what’s next for the Joeys and youth development in Australia as attention turns to mission Malaysia in 2018.

The Joeys recently qualified for the 2018 AFC U16 Championship in Malaysia, in Mongolia. Peter, can you tell us about how the team played and developed in Mongolia?

The AFC (Asian Football Confederation) Qualifying tournament in Mongolia began with a five-day preparation camp in Sydney, then six days in Mongolia before game one against the host nation. The squad took great steps each day in camp and we made solid progress in all three of our matches in Mongolia. We built our foundations and principles of play layer upon layer each day and in all three matches demonstrated the qualities we are developing as a team. The players applied themselves extremely well and they believed in our style of play, never deviating from that in difficult circumstances.

We dominated all three matches and our players got their rewards with three convincing wins against developing opponents. The most pleasing aspect was the way we played, and that the goals we scored were by design. We have improvements to make whereby we will become more lethal in our attack and stronger defensively, but the players should be proud of themselves. They topped the group in style and succeeded in qualifying for next year’s Asian Championships, which we will look to win. 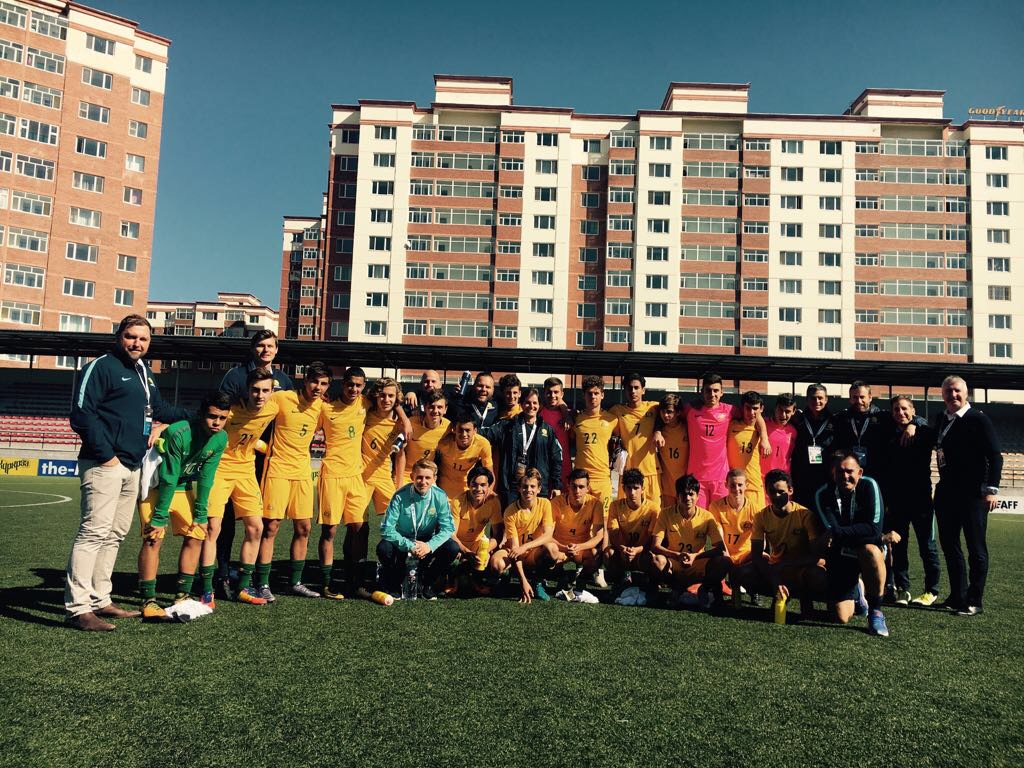 The 2018 AFC U16 Championship will be held in Malaysia in September-October next year. What do you have planned, or are you planning, between now and then to ensure that the team arrives in Malaysia ready and able to challenge some of Asia’s best U16 teams?

Planning has already begun and I am pushing hard to have a productive 2018 from a Joeys perspective. This will entail broadening the net for talent identification across the country, with the objective to create a bigger player pool to develop and select Joeys squads from. A concept we will continue to grow, which we initiated in the lead up to the recent AFC Qualifiers in Mongolia, is ‘Elite Matches’. The Elite Match idea brings together players identified in club land, be it at NPL level or otherwise, to test themselves at a higher level than what they would play at each weekend. I would also like to develop a coach development pathway from these matches, whereby a stronger link is built from club land to the Joeys. Elite Matches will be held in each state and many regions periodically throughout 2018.

Another focus area will be to ensure that we know as many Australian players that are now based and playing abroad. This is something I believe we have only scratched the surface with. Recently we have unearthed some great prospective players in this age group based in Europe. A few of these players were in the Joeys squad for the Qualifiers in Mongolia and we had a few players not selected or named for various reasons that we will continue to monitor and work with to hopefully bring into camps in the near future.

The next important component is to ensure we have more international camps allowing Joeys squads to work together and progress our game as a team. International matches are key. Players need to be tested in international matches to continue their development, and ensure that we continue to take steps developing them to become professional players and hopefully one day Caltex Socceroos.

I believe we will have a great program to help players develop throughout the year with the aim of winning 2018 AFC U16 Championship, which our country has not yet done at this level. It’s an exciting challenge for our country and I know the players and staff are hungry to succeed.

What scouting processes are currently in place to identify as many young prospects as possible? For the Mongolia mission, there were players from a wide variety of clubs – not only Hyundai A-League clubs or overseas teams…

This is an area we need to improve in youth development across our country and like I said previously, the Elite Matches was a great concept that we brought in in the lead up to the Mongolia mission. Elite Matches will provide further opportunities for players to show themselves and test themselves at a higher level. It doesn’t matter who you are or where you’re playing, if you’re good enough I hope we can implement a stronger process to recognise this. In the specific case of Mongolia, the Elite Matches certainly helped our selection process for the Qualifiers.

The sooner we can improve this process the better, and we need this to create more opportunities for talented players. An important aspect of this is how we actually scout players. This is a big project for FFA to implement, but an important one. FFA is introducing a talent identification course enabling people in our game to upskill themselves in this important area. I have also had good discussions with PFA (Professional Footballers Australia) CEO John Didiluca and we hope to create a pathway for PFA members to get involved within talent identification, too. This will be an exciting initiative to keep ex-players in the game, allowing them to give something back while also working on themselves to develop and stay involved in the game.

I believe it’s important to get to FIFA World Cup tournaments as it provides another platform for our players to develop and test themselves against the best in the world at any age group. FIFA World Cups provide a springboard for players individually to further refine themselves at the highest level, and are imperative from a National Team perspective as it allows more time to continue to develop our players and teams on the world stage.

Our qualification path through Asia is challenging and other countries in the region take youth development extremely seriously, devoting huge resources to succeed at this level. This is an aspect our country needs to respect and we need to progress our ways of thinking to create a successful model that caters for our landscape.

So, there is no doubt in my mind we have big steps to take but if we are serious about youth development in our country we need to create ways to make change. One thing for sure is I back an Australian squad against any other country in the world. One day we will win the FIFA World Cup at this level and I know Aussie players and staff will do everything they can to achieve this.

Now that the team has qualified for next year’s AFC U16 Championship, do you think that will drive individuals to new levels as they strive for selection in upcoming squads? What’s your message to any of the players in the recent squad, players known to the system, and those who aren’t, who are keen to make future squads and represent Australia?

Yes, I believe all players will push themselves to become better every day wherever they are, whether they are current Joeys or not. That was a constant message in camp, too. We reiterated what’s required to be successful and achieve our desired goals. To represent Australia at any level is an honour and privilege. Players, coaches or staff should never take it for granted. Some very good players missed out on selection for the Qualifiers in Mongolia and I hope this drives their motivation to get into the squad. I believe competition for spots is alive and well and this is a good place for a National Team to be. A simple message to each player is make sure you’re always better than you were yesterday. If every player does that, the Joeys will be in a good spot.

Finally, how did you find your first experience coaching the Joeys abroad?

I loved every second of it. I was super proud of the players, and really happy that they got the rewards they deserved. They were good little professionals on and off the park and it showed with the performances and results we achieved. For young players to travel abroad and into a country like Mongolia posed many challenges that we needed to be on top of our game with. A super staff was assembled, which helped create a great environment for the players to develop and become not only better players, but better people. I know all the players and staff want to make an impact in 2018.