On the eve of their opener in Qatar, Adam Taggart has sounded a warning for the Olyroos opponents at the AFC U-23 Championships, and declared there is no second chance for the Aussies.

The Olyroos are just two days away from the opening game in Qatar against UAE, in a tournament that doubles as qualification for the Rio Olympics.

Taggart will form part of a vibrant, speedy attacking force for Aurelio Vidmar’s side alongside the likes of Jamie Maclaren, Brandon Borrello, Andrew Hoole and Mustafa Amini.

“There’s a hunger and desire to score goals. We’re always working on those things away from camp to improve those and get better,” Taggart told FFA TV.

“It’s always a little bit difficult to come into camp and gel straight away.

“But as a team we’ve been together for so many camps, so many tournaments now it’s something we need to have in our back pockets already.

“There’s no second chance now we have to go out there with all of our quality and bring together all of our strengths and hopefully make an unstoppable team here in Qatar.” 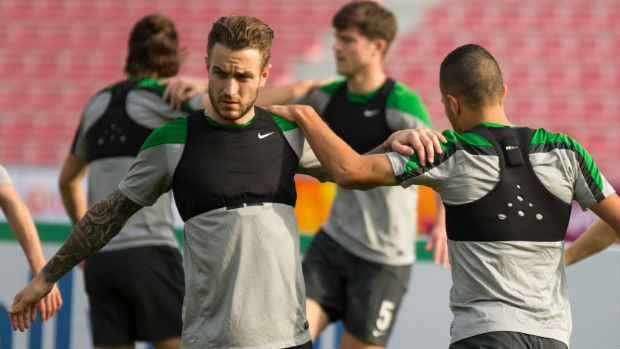 This tournament marks a return to the green and gold for Taggart since he was part of Ange Postecoglou’s Socceroos squad at last year’s World Cup in Brazil.

While he’s endured a frustrating period with injury since moving to Fulham after that tournament, the pacy striker feels he’s matured a lot through those experiences.

“For me throughout my career so far it’s been about improvement and progress and even though it might not have come so much on the field since Brazil, it’s definitely come along off the field,” Taggart said.

“I think I’ve improved in a lot of different ways and when the time comes when I can get a good run of games together in a good team then I think is going to help me for the future.

“That’s a positive I’ve taken over the last year and a half.”