Socceroo Mark Milligan has hailed the team’s ability to take goal-scoring load off striker Tim Cahill after eight different scorers have got on the score-sheet so far in the Asian Cup.

Cahill opened the scoring against Kuwait in the group opener  last Saturday, followed by Massimo Luongo, Mile Jedinak and James Troisi in the 4-1 win.

And on Tuesday night, Matt McKay, Robbie Kruse, Milligan and Tomi Juric all hit the net in the 4-0 steamrolling of Oman

The reliance on Cahill as the major goal scoring option has eased but Milligan stresses the talisman is still the centre-piece of the Socceroos’ attacking structure.

“Obviously it’s very pleasing, but in saying that we play Timmy as a nine and he’s up front and I think that no matter what team you are in you want your number nine scoring goals,” Milligan told reporters on Tuesday.

“Timmy has been fantastic for the past 10-15 years and continues to do so but any help that the midfield can give to him is obviously very pleasing and it is reflection of how we have been playing.”

One such scorer was McKay, who swept home the opening goal against Oman following an assist from Trent Sainsbury. 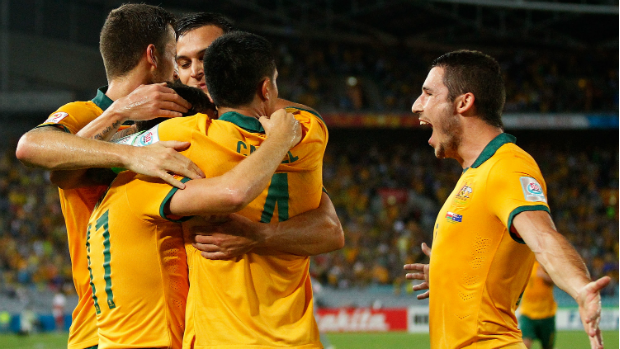 “It was great albeit it was from a few yards out, but the performance last night was good and the goals came from a whole lot of different goal scorers which was great for the side,” the Roar midfielder said.

“We copped quite a bit of slack from our results in the friendlies leading into this tournament and I think the boss has been vindicated in how he approached that.

“We’ve got plenty of depth and every one of the 23 players in the squad if called on to play can do a great job.”

Saturday’s game is essentially a home game for McKay, but he's not feeling any added pressure or expectations.

“Obviously coming to Brisbane it is great for me personally but as a side we have expectations to go and win this game against Korea.”

The Socceroos are now firmly focused on the job ahead.

"We’ve played two games now and had two good results, but I dare say come Saturday, we’re going to be heading out onto the park for another win,” added Milligan.

"We want to make sure as we did last night and we want be improving for Saturday against what is a very good side.

"It is a very important tournament for us being on home soil, and there’s been a lot said about results over the last six months - especially since the World Cup - and I think it is very satisfying as a group to come home and to be playing the kind of football that we are.

"We still have a long way to go in the way that we playing and in the results that we are trying to achieve."