In a sign of things to come, midfielder Massimo Luongo believes he can exert even more influence on the Socceroos as he grows in confidence on the international stage.

Luongo, 22, has been one of the shining stars of the Socceroos’ Asian Cup journey so far, slotting in as a playmaker in a midfield three and starting all three games.

Though he concedes he was surprised to be in the starting XI for the first group game with Kuwait in Melbourne, he's attracted much acclaim from the media since that night for polished performances in all three matches.

But in great news for fans of the Socceroos, he's vowed to develop a more influential role in the team.

“I’m more confident in the team and I think the other players have accepted my role in there, and they know what I’m about,” the Sydney born rising star told reporters on Monday.

“And for myself I need to take more responsibility and maybe do a better job or a bigger job for the team than I have been.

“Maybe do things on my own, maybe make things happen when the game is not going our way or we’re under the cosh a bit… something in my game that sparks the whole team up a bit.

“I do that at Swindon and hopefully I can bring that to the Socceroos.” 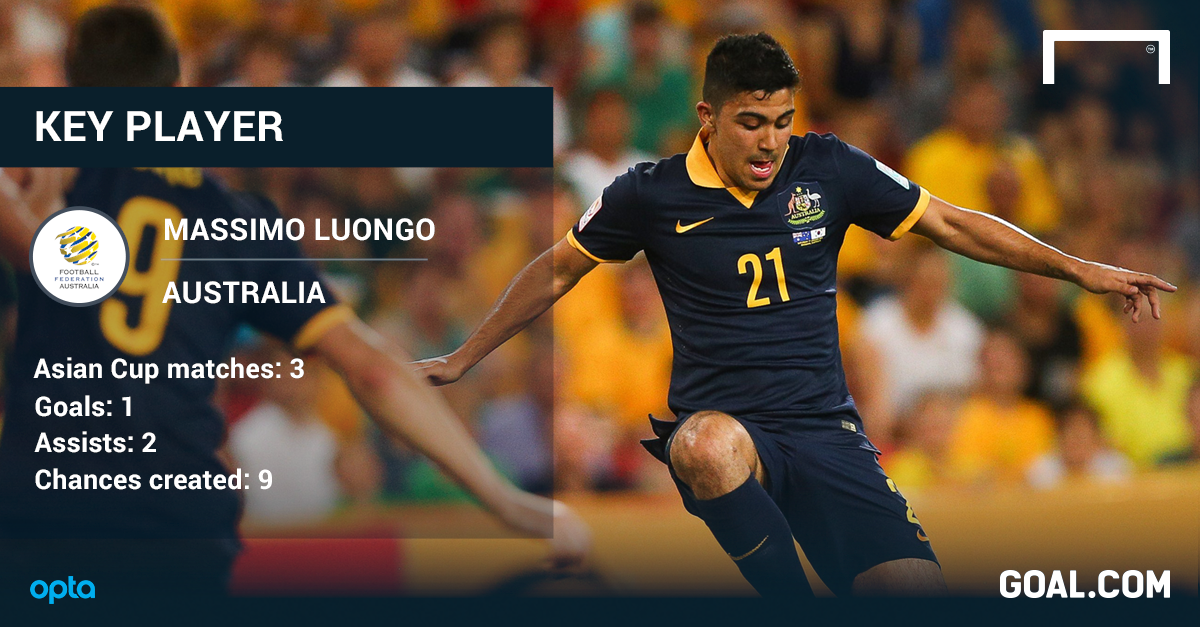 Luongo added he felt he’d played well during the Asian Cup, though not at a consistently high level throughout each 90 minutes.

“I feel everything you’ve seen has been in bits and bobs," the former Spurs player noted.

“I've been happy with the way I've played and obviously I've deserved to be there... It’s been effective but maybe I can offer more over the whole game.

“To be fair, from the first game I’ve felt like I’ve come a long way. It’s only three games but I’ve brought out a few things in my game.

“I’ve come out of my shell a lot more.

"Every game I feel I’m getting more comfortable and stronger."

Luongo agreed with Socceroo coach Ange Postecoglou that the team has to avoid switching off at vital times, something that the analysis has clearly shown after Korea Republic caught out the Aussie defence on Saturday night in the 1-0 group game loss.

“We have to be alert to the dangers,” he said. “It was one of those games when you come off and ask, ‘what happened?’

“How did we lose? Big moments in the game you look back on, though performance wise everyone was quite happy. But we want to push on.”

In good news for Australia, Luongo describes his recovery as “great” following the sweltering heat of Saturday night in Brisbane as he eyes Thursday night's Asian Cup quarter-final with China also at Brisbane Stadium.

“I’m quite surprised how I’ve turned around from that game. The conditions were obviously a bit hot and people talk about the pitch but it’s nothing we haven’t experienced before.

As for the surface, which has received more than its fair share of criticism, news of the six-yard boxes being re-laid didn’t register much with a player who plies his trade in the lower tiers of English football with Swindon.

“Coming from League One it’s perfectly fine for me,” he said with a smile.

The Socceroos will face China PR in the Quarter-Finals of the AFC Asian Cup at Brisbane Stadium on Thursday 22 January (8.30pm local kick off).  Click here  to purchase tickets.