Chris Ikonomidis is hoping the goals will flow in the second half of the Danish Superliga campaign as he targets a return to the Caltex Socceroos squad.

The Australian winger, who is on loan at AGF from Lazio this season, made 13 appearances in all competitions in the first half of 2016/17, scoring one goal and notching two assists.

The Superliga resumes this weekend with AGF set for the visit of AaB on Sunday, and Ikonomidis and compatriot Mustafa Amini are likely to start for the hosts.

Ikonomidis believes his decision to go on loan again this season - the 21-year-old spent the second half of last term at Salernitana in Serie B - is paying off but knows he needs to make more of an impact in the final third.

"I've scored one goal in a cup match to get us through but something I want to improve is the goals in this second half of the season," he told Goal.

"So I've been working a lot in training on that but overall I'm pretty happy.

"I've played heaps of games and getting heaps of match minutes, so that's exactly what I came here for, is to improve and to go back to Lazio next season with a lot more experience and hopefully push for a starting spot there."

With Australia preparing for World Cup qualifiers against Iraq and United Arab Emirates next month, the Superliga's resumption - after a three-month winter break - comes at an ideal time in terms of Ikonomidis' international ambitions.

But Ikonomidis isn't just thinking about the Socceroos. He wants to be a success at Lazio too.

The ex-Sutherland Sharks junior has been at Lazio since 2013 where he started in their youth set-up and made his senior debut in December 2015 in the Europa League.

That is the only first-team appearance he has made for the Serie A club, however, and he is hoping a strong season with AGF will help him catch the eye of key figures at Lazio.

"They've expressed positive feedback for the last six months and they've seen me grow a lot as a player," Ikonomidis said.

Although the Australian speedster has been happy with his personal performances in Denmark, results haven't been brilliant for AGF and the Aarhus-based club sit 11th heading into the second half of the season. 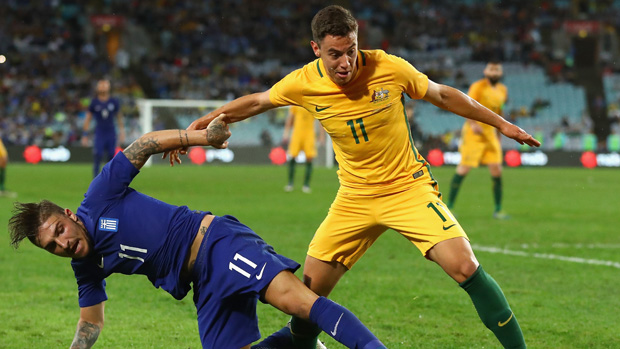 There are just five rounds remaining before the Superliga splits as part of a new competition structure - the top six will compete for the championship, while the bottom eight clubs will battle against relegation.

Ikonomidis and Co. are seven points adrift of the top six spots ahead of their clash with AaB but they are still hopeful of picking up silverware this term as they remain in the last-16 of the DBU Pokal - the Danish Cup.

The DBU Pokal is an important trophy for AGF - they have won it more times than any other club - and lost last year's final 2-1 to FC Copenhagen.

"I think last year, making the cup final, it kind of made it all feel a bit real and made everyone feel like that they can win something important," Ikonomidis said.

"The fans that came, it was really amazing for the club and I think it really left a mark on everyone that was there. So I think that's another incentive to push for that final."

AGF will visit fellow Superliga club Horsens in the DBU Pokal on March 15.