Bundesliga-based Mathew Leckie says the fresh faces in the Caltex Socceroos squad have settled quickly and expects them to make an impact on the pitch in Thursday night’s FIFA World Cup qualifier against Tajikistan.

Why I chose Australia: new striker reveals all

Striker Apostolos Giannou and young defenders Jason Geria and Alex Gersbach have been called into Ange Postecoglou’s for the first time for this camp.

With two big games ahead in the space of five days – including the clash with Jordan in Sydney on March 29 – the trio are likely to be called upon to play some part as the Socceroos take an important step towards Russia 2018.

“It’s always exciting when there’s a few new guys, a couple of young guys as well and they should get the hang of it real quick,” Leckie told reporters while launching the Caltex Socceroos' new playing strip on Tuesday.

“It’s a new thing for them. I’m sure they will be nervous for the first couple of days which is quite normal.

“My first few camps I was very nervous as well. But we’ve got a great bunch of guys, everyone’s down to earth and very welcoming.

“Hopefully they can get comfortable pretty quick and I’m sure they can help us on the pitch as well.”

While it’s still unknown just what XI Postecoglou will go with for Thursday’s clash, Leckie is a likely starter given his strong form for FC Ingolstadt in the Bundesliga.

He scored in the recent 3-3 draw with Stuttgart and has been injury free since he was forced to pull out of Australia’s last qualifiers in November due to illness.

“I’m confident. We’re doing really well as a club so I feel good coming into camp as well,” Leckie said.

“It’s exciting. It’s been seven months since I last played with the national team and I’m looking forward to getting back out there.

“I’ve been in the system long enough now where everything is similar every time we come in.

"We’ve got our tactics and most of the boys that have been here for a long time understand that and we know what to expect when we come into camp.” 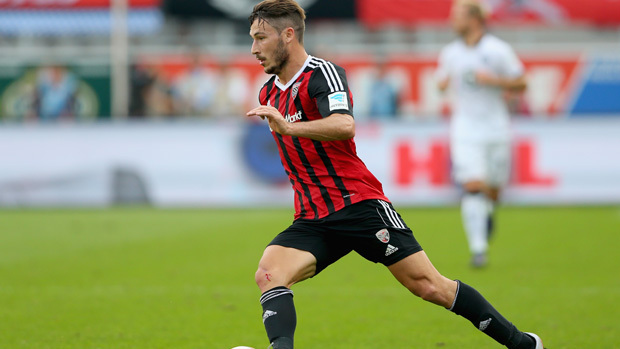 And it will be a homecoming of sorts for the speedy winger, who spent two seasons with the Reds before moving to Europe five years ago.

Leckie says the Socceroos are thrilled to get the chance to play at the new Adelaide Oval and hopes a big crowd will help get them over the line against a “tough” Tajikistan side.

“Remembering the away game there it was pretty tough to score against them, we didn’t open the scoring until the second half,” he said.

“The most important thing is to get a goal early. With all these qualifiers they’re always difficult opposition.

“To be back here in Adelaide now in the Australian jersey and being able to represent the new jersey is a good achievement and very special.”

“We’re very confident at home, we’ve been pretty dominant in most of the qualifiers in Australia so we really want to win both games well.”