​Caltex Socceroos boss Ange Postecoglou has been in charge of the national team for less than three years but has already left an indelible mark on the future of the game in Australia.

That’s the opinion of former Socceroo Mark Koussas, who has marvelled at the rise of Green and Gold since Postecoglou’s reign began.

“It took Ange a while to establish his credentials as a senior coach but there is no question he has changed Australian football forever,” Koussas told www.socceroos.com.au

“He had a strong background as a player and has managed to blend his playing experience with his dynamic attacking approach to the game to now set a fabulous Aussie benchmark.

“It started at club level with Brisbane Roar and Melbourne Victory and has now translated to the national team. His ability to have the dressing room play for him no matter what will ensure he will get the best out of his players.

“Just listen to Tim Cahill talk about Ange and make up your own mind. 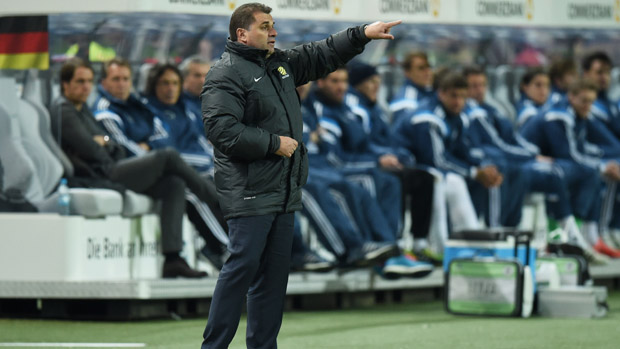 "Ange makes the Socceroos believe as a team no matter what the opposition, and with such an attitude they will always be a chance.

“We have always had players with ability but now these players have a manager that believes in them. That is half the battle there," said the 53-year-old, who is currently living in Sydney.

Koussas himself played three games for the senior Australian team back in the early 1980s after making a name for himself in the NSL with Sydney Olympic.

But it’s at the 1981 World Youth Championships where his star really shone brightest.

In the tournament played in Australia, Koussas scored four goals for the Green and Gold to finish as the tournaments equal top scorer alongside West German pair Ralf Loose and Roland Wohlfarth, and Egypt’s Taher Abouzaid.

The Australians – coached by Les Scheinflug and featuring the likes of Dave Mitchell, Grant Lee and Jimmy Patikas – were eliminated in the quarters by eventual champions West Germany.

Koussas’ Greek heritage means he always keeps a close eye on their football as well and he is delighted to see them heading Down Under for the two-game Dodoni Series.

The Caltex Socceroos and Greece meet in back-to-back friendlies in Sydney on Saturday, June 4, followed by another clash in Melbourne three days later.

“[Greece] are obviously in rebuilding mode after their recent disappointments however you can never underestimate such a team when it comes to results,” Koussas said.

“Some people call these games friendlies but I beg to differ.

“They are more like trial games and in many instances can be very competitive affairs as positions are up for grabs – this is definitely the case for both Australia and Greece this time around.

“It is always good when quality international teams visit our distant shores. It provides quality opposition for our current crop of Socceroos as well as giving the local public a glimpse of international class footballers.”

Koussas still has an affinity for Greek football and credits a former team-mate an ex-Socceroo legend for that.

“I have always been an AEK supporter and that became entrenched in the late 1980s when my good friend Jim Patikas became a famous Aussie face to play for my favourite team.

“He became a true legend in Greece and an unsung one here in Australia – many people do not realise what a legacy Jim created as a trailblazer in Greece back then.”