Two of the Socceroos biggest Asian rivals have made contrasting starts to their World Cup qualifying campaigns on Tuesday night, Korea Republic picking up three points and Japan playing out a stalemate on home soil.

Lee Jae-sung and Son Heung-min found the target as South Korea defeated Myanmar 2-0 in Bangkok to make a winning start on their road to Russia 2018.

Beaten by the Socceroos in January's Asian Cup final the South Koreans are bidding to bounce back by reaching their ninth consecutive World Cup in three years' time.

Lee struck a late winner in a 1-0 friendly victory over New Zealand back in March, and the Jeonbuk Motors man had a telling impact once again here with a free header from a corner in the first half.

He nodded home after Myanmar goalkeeper Van Lal Hruai had failed to collect Son's delivery from the left-hand side.

Midway through the second half, Son benefitted directly from more poor goalkeeping as his well-struck free-kick from 30 yards sailed straight through the hands of Hruai and into the roof of the net.

In front of a sparse crowd in Bangkok - after Myanmar were banned from playing on home soil due to crowd misbehaviour in a World Cup qualifier in 2011 - the result sees South Korea get off to a solid start in Group G.

For the world's number 143-ranked side Myanmar, however, it was a setback following a 2-2 draw at Laos in their opening fixture. 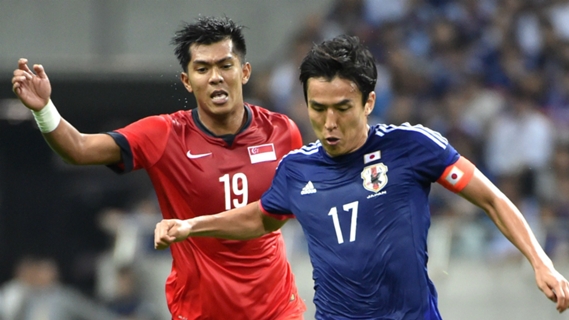 Meanwhile Japan were made to rue their profligacy as they started their World Cup qualifying campaign with a 0-0 draw versus Singapore.

Mohamad Izwan bin Mahbud put on a goalkeeping masterclass as Japan were held to a frustrating 0-0 draw by Singapore in their opening 2018 World Cup qualifier.

Vahid Halilhodzic's Japan side were the overwhelming favourites heading into the Group E Asian qualifying contest in Saitama.

However, they were unable to find a way past Mahbud, who made a string of top-draw saves to earn Bernd Stange's men a surprise point.

Japan showcased their superiority in a one-sided first half, but Halilhodzic saw a series of chances go begging with Shinji Okazaki twice denied well by Mahbud.

It was a similar story after the break as Japan peppered the Singapore goal, only for Mahbud to keep them at bay with Okazaki and Keisuke Honda both left flabbergasted by brilliant saves.

Even when Honda did find a way past Mahbud with a long-range free-kick, Singapore - who beat Cambodia 4-0 in their opening qualifier - were saved by the crossbar, as the game ended all square.