The Joeys have made it two wins from two at the AFC U-16 Championship 2016 qualifiers in Hanoi, running out 3-1 winners over Myanmar overnight.

Tony Vidmar’s youngster’s made the perfect start, taking the llead inside the first minute through Lachlan Brook.

Mersim Memeti’s through-ball split the Myanmar defence allowing Adrian Valenti to race clear before he cut back to Ramy Najjarine who produced a clever flick to Brook who made no mistake.

Myanmar equalized on 26 minutes but with a minute the Aussie youngsters were back in front when Mark Moric coolly converted a one-on-one chance.

Nine minutes before the break it was 3-1 with Brook turning provider this time, finding Najjarine in the box and he avoided a scramble to get a shot away which gave the ‘keeper no chance.

While they couldn’t add to the score after half-time, the Joeys stayed solid in defence to remain perfect in the tournament after their 14-0 win over Guam on Wednesday. 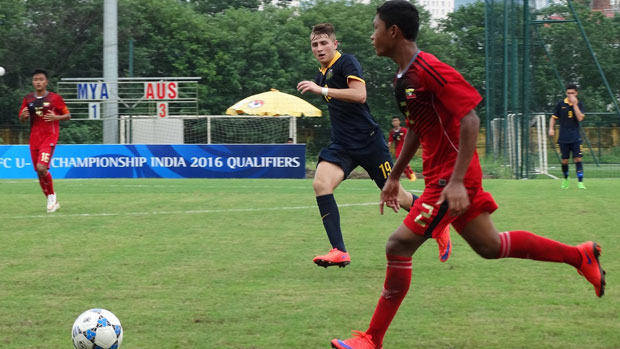 They finish the group stage against hosts Vietnam on Sunday, who crushed Guam 18-0 in the other match on Friday.

Joeys boss Vidmar admits his side was below their best in the victory.

“Even though we won, it was a disappointing performance,” he said.

“Possession given away too often under no pressure, poor in transition and weren’t winning the ‘second balls’.

“We allowed Myanmar to play direct, and they created a number of chances from our mistakes.

“We’ll need a massive improvement in our next match against Vietnam, if we want to qualify.”