The Joeys’ 2015 FIFA U-17 World Cup campaign should be a learning experience for the 21 young footballers selected to represent Australia.

The Joeys bowed out of the tournament after a 6-0 loss to Nigeria in the Round of 16, but not before progressing through the group stage with four points, including a famous 2-1 win over Argentina, and a 0-0 draw against Mexico.

FFA U-16/U-17 technical director Peter de Roo said the Joeys should hold their heads high, having played some periods of great football throughout the 2015 FIFA U-17 World Cup.

“When you look over the whole tournament, we can only be proud of these boys,” de Roo said.

“It’s been a great learning experience for all of them.

“We didn’t come here with expectations of reaching a certain stage of the competition.

“Our goal was to play the football we wanted to play, regardless of who we took on, and I think we’ve done that.

“Our expectation was that we wanted to play positive, aggressive football.

“We have matched four world class teams in possession statistics.

“We got out of a group stage with some decent football, not sitting back, really taking it to the opponent.

“We know it takes risk, but it’s the only way to improve the players and it’s how we want to play as Aussies.”

Joeys head coach Tony Vidmar said he hoped his young side learns from this experience.

“I spoke to the boys after the game and told them we were disappointed with this performance,” Vidmar said.

“But I told them we can’t be disappointed with the performances in the tournament before tonight. 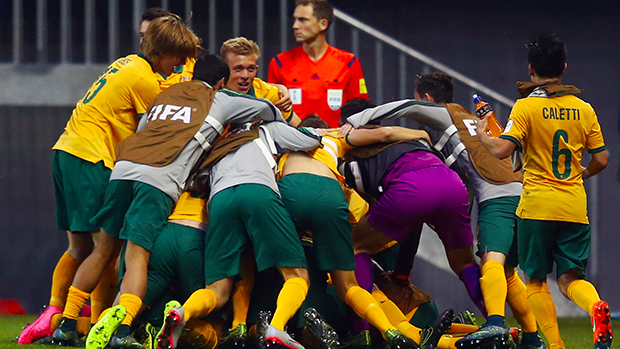 “There’s been a lot of fantastic learning football moments – both good and bad – and hopefully the boys can take those bad moments and improve from them.

“That’s all we ask, because we hope that these players will one day become future national team players.”

The Joeys performed admirably over the course of their time in Chile, beginning their campaign with a 4-1 loss to Germany before improving with a 0-0 draw with Mexico, and completing the group stage with a 2-1 win over Argentina.

This group of Joeys will now return to their clubs and start the next stage of their careers, while the next generation of Joeys recently qualified for the 2016 AFC U-16 Championship after going through their qualifying group undefeated.