Greek star back in Australia to meet Caltex Socceroos

While the Greece national team might not have hit Australia’s shores for ten years, the Socceroos’ June friendlies will not be the first time Aussies have seen Galanolefki skipper Vasilis Torosidis up close.

The Roma midfielder was part of the squad that travelled Down Under last July for the International Champions Cup and has been with the Serie A club for the past four seasons.

He will be with the Italian giants until at least the end of next season having signed a contract extension in August 2014 but didn’t play a part in this weeks' Champions League action as Roma succumbed to Real Madrid in their round of 16 tie.

Torosidis made his senior debut for hometown club Skoda Xanthi as a teenager back in 2003 and went on to make over 100 appearances for Greek powerhouse Olympiacos before his move to Roma.

The 30-year-old is renowned for his versatility and aerial prowess. While capable of playing anywhere across the park, his high work rate usually sees him deployed in a combative midfield role or as a wing back. 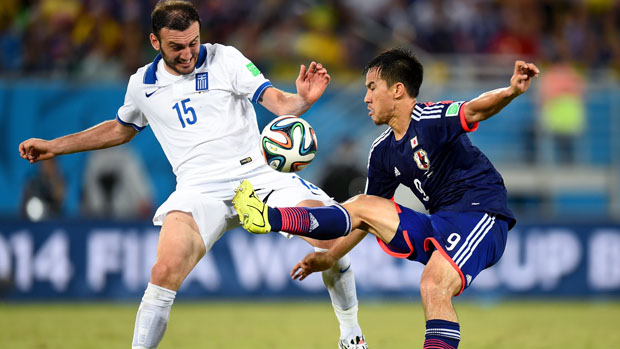 In terms of his international pedigree Torosidis made his Greece debut in a Euro 2008 qualifier against Turkey and retained his place in the squad for the tournament after they qualified.

He has gone on to make 79 appearances for his country, netting seven goals, none more important than the one he scored against Nigeria at South Africa 2010 to give Greece their first ever win at a FIFA World Cup.

Torosidis also helped the world no.39 get to the 2014 edition in Brazil - just the third time Greece have qualified for the World Cup - where they were knocked out in the round of 16 on penalties by Costa Rica.

He's just one of the players who are set to light up the pitch when the Greeks face the Caltex Socceroos in June.