Greek coach Michael Skibbe said his side looked tired in the first half but got stronger in the second, and the German praised the Caltex Socceroos's play on what he said was a difficult surface.

With the Greeks arriving only on Wednesday night, it was a strong effort from the visitors who almost held on for the win.

And with the Greeks’ own World Cup qualification campaign coming soon, it was a worthwhile hitout, said Skibbe.

“I want to congratulate for the last minute victory for Australia. I think they created a lot of chances and sometimes we were unlucky we didn’t get the goal earlier.

“On the other hand we are a little bit sad about the goal in the last minute. 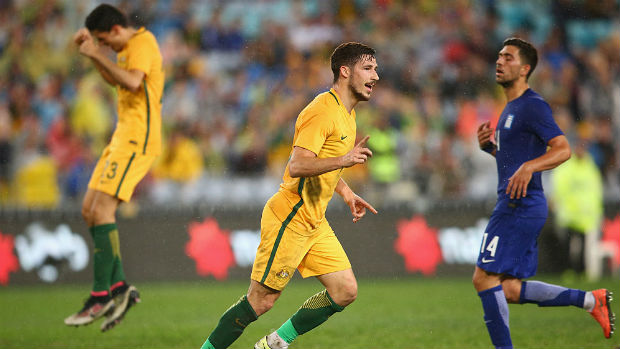 “But however Australia had much more pressure in their play and it seems to be especially in the first half my team seemed a little tired.

“It was getting better in the second half - until the 75th or 80th minute it was an equal match.

“We were doing much better in the second half than we did before. But in the last ten minutes there was a lot of pressure and two or three times we had a lucky moment until we got [conceded] the goal."

Skibbe added it was a physical encounter due to the poor surface at ANZ Stadium.

“The field and the weather it was really bad conditions but on the other hand we knew that it was a match with a lot of fight.

“We tried to do as best as possible and it was getting better in the second half.

“We have to concentrate now on the match in Melbourne.”